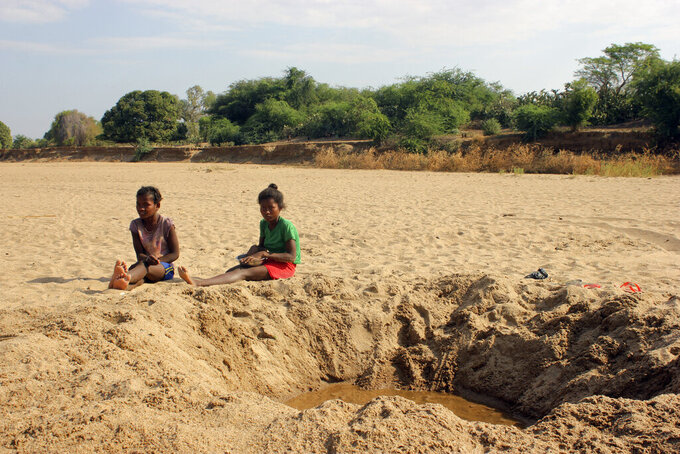 Laetitia Bezain, ASSOCIATED PRESS
FILE - Children sit by a dug out water hole in a dry river bed in the remote village of Fenoaivo, Madagascar, Nov. 11, 2020. Don’t blame climate change for the devastating Madagascar drought and famine, scientists said in a new quick analysis. World Weather Attribution, which does real time studies of extreme weather throughout the world, examined the drought where Madagascar has had only 60% of its normal rainfall from July 2019 to June 2021 and found no statistically significant fingerprint of human-caused climate change. Instead, this was just a random weather quirk, one that has a chance of happening once every 135 years or so, the study said Wednesday, Dec. 1, 2021. (AP Photo/Laetitia Bezain)

World Weather Attribution, which does real time studies of extreme weather throughout the world, examined the drought, which has left Madagascar with 60% of its normal rainfall from July 2019 to June 2021.

The group found no statistically significant fingerprint of human-caused climate change. Instead, the drought was a random weather quirk, one that has a chance of happening once every 135 years or so, the researchers concluded.

“It’s a rare event but it’s within natural variability,” said study co-author Friederike Otto, a climate scientist at the Imperial College of London. “For this type of low rainfall, climate change is not a main driver.”

In Madagascar, swings of rainfall from high to low are common, Otto said. But starvation has another big cause, she said.

“The driver of the famine or the food security is very much the high vulnerability of the people of the region,” Otto said. “There’s shockingly high poverty rates.”

The team of international scientists relied on established technique of using computer simulations to figure out what would happen in a world without nearly 2.2 degrees (1.2 degrees Celsius) of warming over pre-industrial times and comparing it to what happened. With this method, the scientists have found many weather extremes to be worsened by global warming, including this summer's heat wave in the U.S. Pacific Northwest and western Canada and deadly European flooding.

The latest study has not been peer reviewed yet.