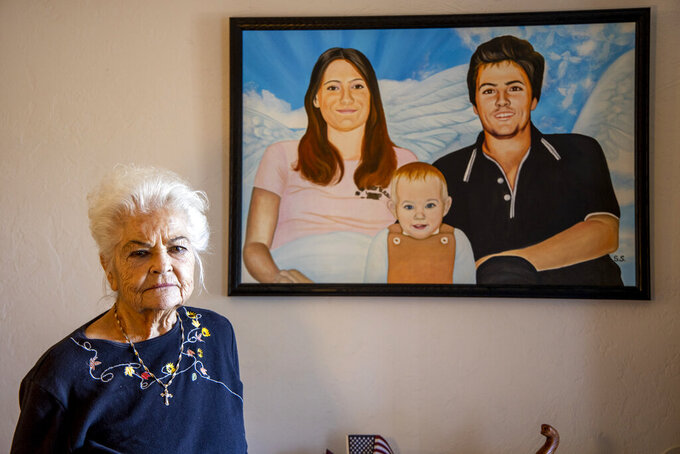 AUSTIN, Texas (AP) — A decades-long search by a Florida woman and her extended family linked to an unsolved murder case has resulted in the woman finally finding her missing granddaughter, now grown with no previous knowledge of her tragic history, officials said Thursday.

Meanwhile, the mystery behind who brutally killed the girl's parents more than 40 years ago remains unsolved and has Texas authorities seeking the public's help.

Harold Dean Clouse Jr., Tina Linn Clouse and their infant daughter had vanished in October 1980, shortly after the young family moved from New Smyrna Beach, Florida, to the Dallas suburb of Lewisville, Texas, according to the Texas Attorney General's Office.

In January 1981, in a rural area east of Houston, a dog that returned home with a decomposed human arm in its mouth prompted a police search that located the remains of an unidentified couple, the Houston Chronicle reported. The Harris County medical examiner's office said the man had been beaten to death, while the woman had been strangled.

The couple remained unidentified until last October when a group of genetic genealogists who worked with law enforcement tested the remains and identified them as the Clouse couple, First Assistant Attorney General Brent Webster said at a Thursday afternoon news conference in Austin, Texas. But no sign of their infant granddaughter, known to them as Holly Marie Clouse, was found with her parents’ remains.

Webster did not answer questions during Thursday's news conference but appealed for public help in solving the homicide cases. Texas Attorney General Ken Paxton, who is running for reelection, did not attend.

As for the missing infant, it wasn't until Tuesday, when modern technology led investigators into her workplace, that the now 42-year-old woman would learn of her biological family and her tragic background. Before that, all she knew was that she had been adopted and raised by an Oklahoma family who had adopted her.

The child’s adoptive family are not suspects in her disappearance or her parents’ deaths, Webster said. He declined to provide their identities or how the child identifies herself today.

Hours after the stunning revelation, the Oklahoma woman was introduced to her grandmother, aunts and uncles during a Zoom call. She told them she had been married for more than 20 years and has five children and two infant grandchildren, the Chronicle reported.

But many questions remain, including who killed the Clouses.

At some point, two women left the child at an Arizona church and took her into its care, Webster said.

“Two women who identified themselves as members of a nomadic religious group brought (the child) to the church. They were wearing white robes, and they were barefoot. They indicated the beliefs of their religion included the separation of male and female members, practicing vegetarian habits and not using or wearing leather goods,” Webster said.

It was not known how the women came into possession of the infant. Investigators believed the group traveled around the American Southwest, including Texas, and were known in the Yuma, Arizona, area for asking for food, Webster said.

In late December 1980 or early January 1981, the missing couple's family received a telephone call from a woman identifying herself only as “Sister Susan.” The woman said she was calling from Los Angeles to explain that the missing couple had joined their religious group, renounced all her worldly possessions and wanted no further contact with their families. The woman asked if the family wanted the return of the missing couple's car.

A rendezvous was arranged at the Daytona Motor Speedway in Florida and authorities were notified, Webster said. They encountered a man and three berobed women. The women were taken into custody and the car was turned over to Donna Casasanta, Harold Dean Clouse's mother, but no case file about the women's arrest could be found by Florida authorities, Webster said.

Webster appealed Thursday to the public for any information regarding the unsolved homicide cold case, noting that many questions remain unanswered. Casasanta herself said in a statement issued by the Attorney General’s office that she “prayed for more than 40 years for answers, and the Lord has revealed some of it.”