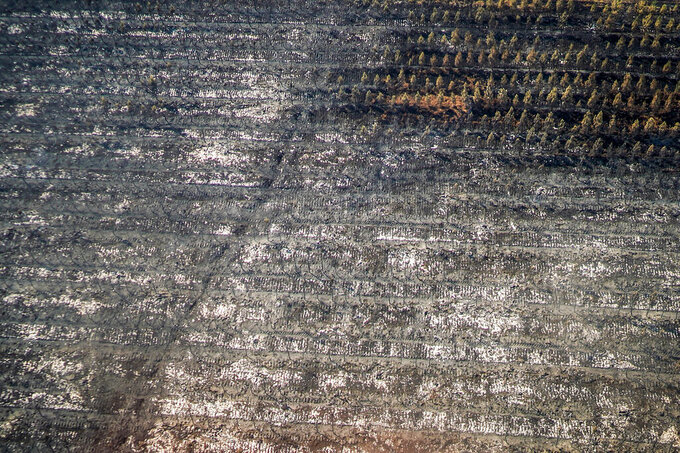 Uncredited, ASSOCIATED PRESS
This photo provided by the fire brigade of the Gironde region SDIS 33, (Departmental fire and rescue service 33) shows the charred remains of a forest after a blaze near Saint-Magne, south of Bordeaux, southwestern France, Thursday, Aug. 11, 2022. (SDIS 33 via AP)

PARIS (AP) — Firefighters from across Europe started arriving in France on Friday to help battle several wildfires, including a giant blaze ravaging pine forests in the southwest.

A series of heat waves have compounded a critical drought in much of Europe to create prime wildfire conditions. Portugal had pine forests burning for a seventh day Friday, while Britain sweated through another day of unusually warm weather.

The firefighters’ brigade from France's Gironde region said the spread of the forest fire was limited overnight due to little wind but conditions for containing the blaze remained “unfavorable” due to hot, dry weather.

The fire in the Gironde region and neighboring Landes has burned more than 74 square kilometers (29 square miles) since Tuesday and led to the evacuation of at least 10,000 people.

More than 360 firefighters and 100 specialized land vehicles were sent from Germany, Romania, Poland and Austria. They are joining over 1,000 French firefighters already on site. Greece sent two specialized Canadair aircraft.

Sweden deployed two two firefighting Air Tractor planes to to help battle a different wildfire, in the Brittany region of western France, that burned a patch of Paimpont Forest, which is also known as Brocéliande from the mythical events described in the medieval legend of King Arthur.

More than than 600 square kilometers (232 square miles) of forest land has burned since the start of the year in France, more than any other year in the past decade, according to the European Forest Fire Information System (EFFIS).

The European Union's Earth-monitoring Copernicus program said satellite observations showed estimated carbon emissions from wildfires in France during June, July and August were the highest since 2003, reflecting the severity of this year’s fire season.

In Portugal, more than 1,600 firefighters, 500 vehicles and 17 aircraft fought the week-old wildfire that has charred around 10 square kilometers (4 square miles). Much of the burned land is the Serra da Estrela National Park, a protected nature area and UNESCO World Heritage Site that is thinly populated.

The burning areas are hard for firefighters on the ground to reach due to high peaks and deep ravines, but two of the country’s three Canadair water-dumping aircraft have been unavailable on some recent days for mechanical reasons.

Portuguese Prime Minister Antonio Costa said only one water-dropping plane from Spain was available to help out because other Spanish planes were deployed to France under the European Union's mutual aid system.

“Contrary to how things used to be when wildfires were mostly in southern Europe, unfortunately, they are now more widespread,” Costa said, describing the EU's emergency cooperation mechanism as fully stretched.

Britain's weather service extended an extreme heat warning through the weekend for most of England and parts of Wales. Temperatures were forecast for above 30 degrees Celsius (86 F) and to reach up to 36 degrees Celsius (96.8 F) in some places before more typical cooler weather and rain arrive next week.

The Met Office said many people were expected to experience health effects from the hot weather, especially individuals who are sensitive to the heat.