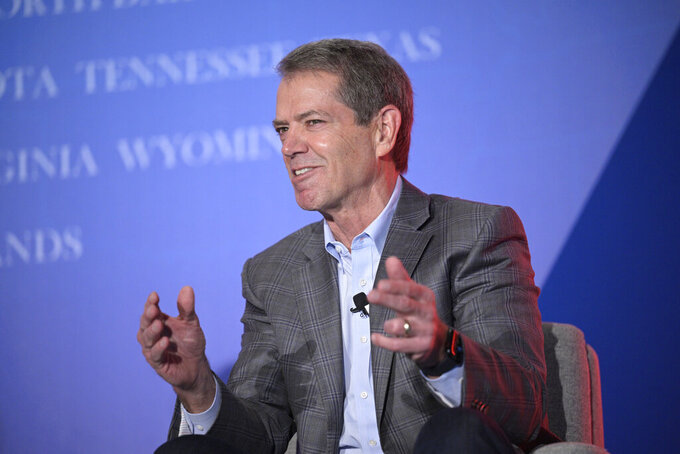 Phelan M. Ebenhack, ASSOCIATED PRESS
FILE - Nebraska Gov.-elect Jim Pillen answers a question while taking part in a panel discussion during a Republican Governors Association conference on Nov. 16, 2022, in Orlando, Fla. Pete Ricketts, Nebraska’s outgoing governor, announced his intention Tuesday, Dec. 6, to seek appointment to the state’s U.S. Senate seat being vacated by fellow Republican Ben Sasse, who is leaving Congress to become president of the University of Florida. The appointment will be made by Pillen, who was endorsed by and received more than $100,000 in campaign contributions from Ricketts. (AP Photo/Phelan M. Ebenhack, File)

OMAHA, Neb. (AP) — Outgoing Nebraska Gov. Pete Ricketts announced his intention Tuesday to seek appointment to the state’s U.S. Senate seat being vacated by fellow Republican Ben Sasse, who is leaving Congress to become president of the University of Florida.

Ricketts announced through a political consultant that he is submitting an application to be appointed to the seat, following weeks of speculation among Republicans that he would be the likely replacement for Sasse.

The appointment will be made by Gov.-elect Jim Pillen, who received Ricketts' endorsement and more than $100,000 in direct contributions from the governor toward Pillen's campaign to succeed him. With Ricketts' help, Pillen won a hard-fought primary race earlier this year to secure the Republican nomination and will replace Ricketts next month. Ricketts could not seek a third term as governor due to term limits.

In the May GOP primary, Pillen defeated businessman Chuck Herbster, who was backed by former President Donald Trump. The primary revealed divisions in the Republican Party between activists who support Trump and want to take the party further to the right and more moderate members who backed Pillen.

In his announcement to seek the Senate seat, Ricketts said he wants to promote a conservative agenda in Washington based on his plans to "cut taxes, strengthen public safety and our national security, and protect our most sacred freedoms.”

“For me, it came down to a single question: How can I best serve the people of Nebraska and advance our conservative values?" he said in the written statement. “In Congress, we’re in a fight for the future of our nation, and it’s a fight we have to win.”

Ricketts has served as Nebraska's governor since 2014. A wealthy former executive and the son of billionaire TD Ameritrade founder Joe Ricketts, he has routinely used his wealth to back conservative causes and candidates.

It's not Ricketts' first shot at the U.S. Senate. In 2006, he challenged U.S. Sen. Ben Nelson, a Democrat, but lost badly despite spending some $12 million of his own money in the race.

Sasse, a second-term senator who has endured rebukes from his own party for his outspoken criticism of Trump, announced in October that he would leave the Senate to take the Florida post. He officially submitted his resignation letter Monday, saying he plans to leave the Senate effective Jan. 8 — after Ricketts leaves the governor's office and Pillen in sworn in.

Pillen announced on Monday that he plans to accept applications through Dec. 23 to replace Sasse in the Senate.

Sasse’s replacement will serve until 2024, the next opportunity for a special election for the seat. The winner of that election would then have to run again in 2026, when Sasse’s term expires.