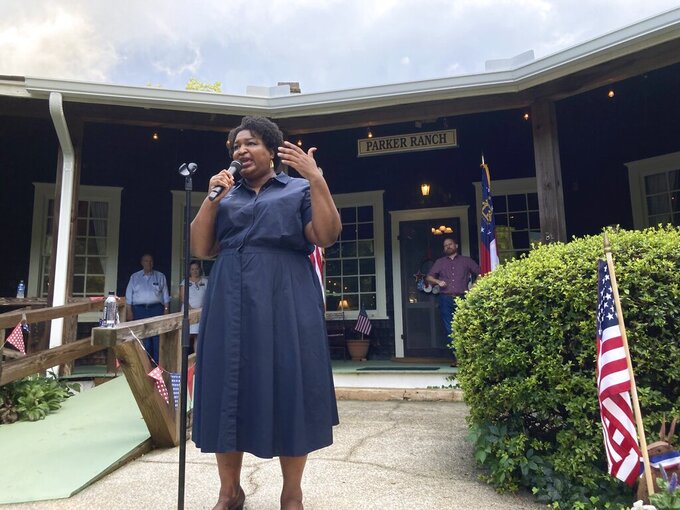 MCDONOUGH, Ga. (AP) — Georgia Gov. Brian Kemp on Friday took aim at the “Biden recession" and tacked the blame on Democrat Stacey Abrams, becoming one of many Republicans to seek to weigh down their rivals with voters' worries about the economy.

How voters see the economy will be key in November's elections nationwide. Currently, Democratic President Joe Biden has rock-bottom approval ratings, and a second quarter of economic contraction is compounding political woes brought on by high inflation.

But while the argument against Democrats and the economy is straightforward for Republicans including Georgia’s Herschel Walker, who is challenging Democratic Sen. Raphael Warnock, it’s trickier for Kemp.

Along with other Republican governors seeking reelection, such as Florida's Ron DeSantis and Ohio's Mike DeWine, Kemp must defend his economic record while attacking Biden. Kemp at times contends that Georgia's economy is good and the national economy is bad, even though Georgia voters only experience one economy.

“Georgians know that our economy is fighting through the Biden-Abrams agenda, despite what’s going on nationally," Kemp told reporters in the Atlanta suburb of McDonough, arguing Abrams bears blame for “runaway spending and disastrous policies” because she campaigned for Biden and even sought to be his vice president.

Abrams said Thursday that Kemp's division between Georgia and the national economy is “mathematically and economically impossible," and that Kemp has "woefully underperformed" at helping people.

“He has done very well for those who are already doing well,” Abrams told reporters after a speech in Clayton in north Clayton. "But if you were struggling in Georgia, Brian Kemp has done absolutely nothing to help you move forward.”

The economy also is central in Georgia's closely contested Senate race. Warnock couches many proposals as meant to fight higher prices, including seeking a suspension of the federal gas tax and price limits on insulin. Walker focuses on increasing domestic oil production and attacks Warnock as a rubber stamp for Biden.

In reality, the economy is “a mixed bag,” said Emory University finance professor Tom Smith. Georgia has record low unemployment and more people working than ever before. Smith said the worst of inflation may be over. Gas prices have fallen more than 50 cents a gallon in Georgia during July, according to AAA. But Smith said the economy is wobbling and that a recession may have been going on for months.

On McDonough's courthouse square, some voters said Friday that they're weighing the arguments.

Times are good for Keith Sweat, who owns an art gallery and framing business. He said his business “skyrocketed” when the COVID-19 pandemic made people focus on beautifying their homes, and hasn’t slowed down.

“People ware wary, but they haven’t stopped spending, and that is unusual,” said Sweat. He said he's not aligned with either party.

Karen Denegall of Ellenwood was helping her sister relocate her coffee shop Friday. She writes off gas prices as caused by the war in Ukraine, but said she's feeling the pain of high food prices.

“What can we do to make groceries go down?” asked Denegall. A medical worker, she said her own finances are OK, but said she expects some Democrats to defect to Republicans.

Abrams has called on Kemp to suspend the gas tax through year end and seeks another round of income tax refunds using billions in state surplus funds. She says Democrats, including Warnock, should get credit for the “resources that have poured into the state” through COVID-19 relief, fattening its coffers and goosing the job market.

Abrams advocates a housing plan that she ways would improve affordability. She also argues that expanding state-federal Medicaid health insurance to all adults would reduce costs for Georgians.

In the Senate race, Walker argues Warnock shares blame with Biden for every economic ill.

“Why has my opponent not voted that we can continue to have an economy that’s going to be flourishing?” Walker said at a recent campaign stop in north Georgia.

Warnock counters by highlighting his work in Washington that aligns him with “working-class Georgians.”

“Listen,” he said recently while campaigning in Atlanta, “I’m focused on lowering prices for ordinary folks.”

He’s pushed his work on the so-called CHIPS bill that passed the Senate this week with 17 Republican votes. The plan, pending in the House, would jumpstart microchip production in the United States, with Warnock emphasizing benefits for Georgia firms.

Warnock also highlights Georgia projects in a sweeping infrastructure plan, proposals to lower insulin costs for diabetics and his call to suspend the federal gas tax. Warnock unfurled the gas tax proposal in February, ahead of other Democrats including Biden. In another move showing a fault line between himself and the White House, Warnock emphasizes that he’s “pushing” Biden to be more aggressive in forgiving student loan debts. The president has said he expects to make a decision on such aid in August.

“I’ve got until November to see how things are going,” she said.