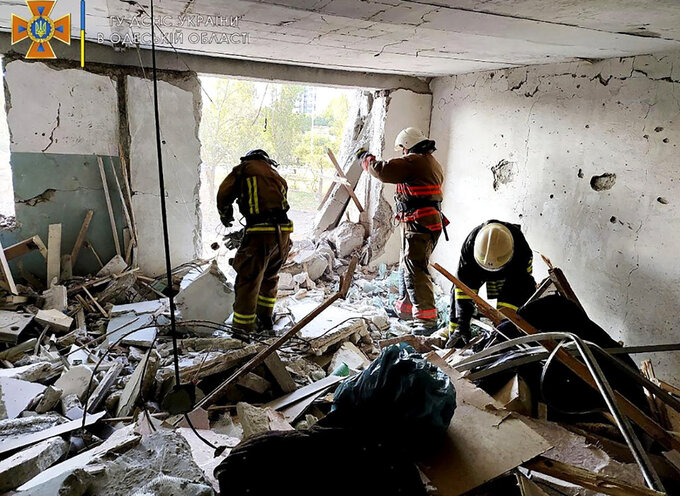 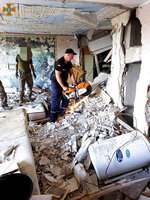 POKROVSK, Ukraine (AP) — A Russian airstrike on residential areas killed at least 21 people early Friday near the Ukrainian port of Odesa, authorities reported, a day after the withdrawal of Moscow's forces from an island in the Black Sea had seemed to ease the threat to the city.

Video of the attack before daybreak showed the charred ruins of buildings in the small town of Serhiivka, about 50 kilometers (31 miles) from Odesa. The Ukrainian president’s office said warplanes fired three missiles that struck an apartment building and a campsite.

Ukrainian authorities interpreted the attack as payback for the withdrawal of Russian troops from Snake Island a day earlier, though Moscow portrayed their departure as a “goodwill gesture” to help unblock exports of grain.

Russian forces took control of the island in the opening days of the war in the apparent hope of using it as a staging ground for an assault on Odesa, Ukraine's biggest port and the headquarters of its navy.

“The occupiers cannot win on the battlefield, so they resort to vile killing of civilians," said Ivan Bakanov, head of Ukraine’s security service, the SBU. "After the enemy was dislodged from Snake Island, he decided to respond with the cynical shelling of civilian targets.”

Large numbers of civilians were killed in Russian bombardments earlier in the war, including at a hospital, a theater used as a shelter, and a train station. Until this week, mass casualties involving residents appeared to become less frequent as Moscow concentrated on capturing eastern Ukraine's Donbas region.

Russian missiles struck the Kyiv region last weekend after weeks of relative calm around the capital and an airstrike Monday on a shopping mall in the central city of Kremenchuk killed at least 19 people.

A U.S. defense official said Friday in Washington that Russian forces appeared to use an anti-ship missile in the mall attack, a type of weapon that the official said is not accurate against land targets. Russia's defense ministry spokesman claimed earlier this week that warplanes fired precision-guided missiles at a depot that contained Western weapons and ammunition, which detonated and set the mall on fire. Ukrainian authorities said that in addition to the direct hit on the mall, a factory was struck, but denied it housed weapons.

Ukrainian President Volodymr Zelenskyy noted that as in Monday's shopping mall attack in Kremenchuk, Russian forces on Friday appeared to use anti-ship missiles to hit Serhiivka.

“These missiles, Kh-22, were designed to destroy aircraft carriers and other large warships, and the Russian army used them against an ordinary nine-story building with ordinary civilian people,” he said at a news conference Friday.

Twenty-one people — including an 11-year-old boy, his mother and the 42-year-old coach of a children's soccer team — were killed and 38 others, including six children and a pregnant woman, were hospitalized, Ukrainian officials reported. Most of the victims were in the apartment building.

“Snake Island is key for controlling the Black Sea and could help cover the Russian attack if the Kremlin opted for an amphibious landing operation in Odesa or elsewhere in the region," he said. "Now those plans are pushed back.”

Ukraine’s military claimed a barrage of its artillery and missiles forced the Russians to flee the island in two small speedboats. The exact number of troops withdrawn was not disclosed.

Early in the war, the island became a symbol of Ukrainian defiance. When a Russian warship demanded that its defenders surrender, they supposedly replied: “Go (expletive) yourself.”

Zelenskyy said that although the pullout did not guarantee the Black Sea region’s safety, it would “significantly limit” Russian activities there.

In eastern Ukraine, Russian forces kept up their push to encircle the city of Lysychansk, the last stronghold of resistance in Luhansk, one of two provinces that make up the Donbas.

“The shelling of the city is very intensive,” Luhansk Gov. Serhiy Haidai said. "The occupiers are destroying one house after another with heavy artillery and other weapons. Residents of Lysychansk are hiding in basements almost round the clock.”

Haidai said the Russians were fighting for control of an oil refinery on the city’s edge. But Russian Defense Ministry spokesman Igor Konashenkov said Russian and separatist forces had taken control of the refinery as well as a mine and a gelatin factory.

Ukraine’s presidential office said Russian strikes in the past 24 hours also killed civilians in eastern Ukraine — four in the northeastern Kharkiv region and another four in Donetsk province.

—The Pentagon said it will supply the country with $820 million in new military aid, including surface-to-air missile systems and counter-artillery radar to respond to Russia’s heavy reliance on long-range strikes. All told, the U.S. has provided more than $8.8 billion in weapons and training to Ukraine.

In other developments, a pro-Moscow separatist news agency in eastern Ukraine reported that two more Britons it identified as mercenaries fighting for Ukraine are facing the same charges on which three other foreigners were recently sentenced to death. The news agency identified the pair as Dylan Healy and Andrew Hill, without providing further details. Britain's SkyNews said they had been captured in eastern Ukraine several weeks ago.

Follow AP's coverage of the Ukraine war at https://apnews.com/hub/russia-ukraine