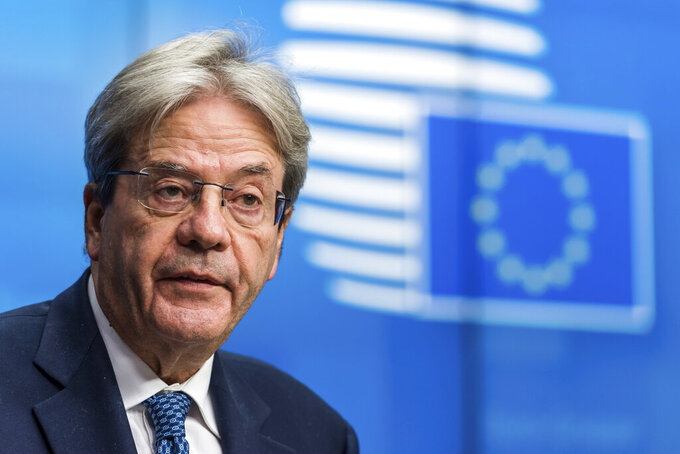 FRANKFURT, Germany (AP) — The European Union's executive commission slashed its forecast for economic growth next year, saying the 19 countries that use the euro currency will slide into recession over the winter as peak inflation hangs on for longer than expected and high fuel and heating costs erode consumer purchasing power.

The European Commission's autumn forecast released Friday predicts falling economic output in the last three months of this year and the first months of 2023.

The commission says high energy prices, a rising cost of living, higher interest rates and slowing global trade “are expected to tip the EU, the euro area and most member states into recession in the last quarter of the year.”

Going forward, the growth forecast for all of 2023 was lowered to 0.3% from 1.4% expected in the previous forecast from July.

“The EU economy is at a turning point,” said Paolo Gentiloni, European commissioner for economy.

“After a surprisingly strong first half of the year, the EU economy lost momentum in the third quarter and recent survey data point to a contraction for the winter," he told reporters in Brussels. "The outlook for next year has weakened significantly.”

The worst performer next year is likely to be Germany, Europe's largest economy and one of the most dependent on Russian natural gas before the war in Ukraine. Germany was expected to see output shrink by 0.6% over the next year.

Natural gas and electricity prices have soared as Russia has slashed gas supplies to Europe used for heating, electricity and industrial processes. European officials have accused Russia of energy warfare to punish EU countries for supporting Ukraine, while state-owned supplier Gazprom has cited technical reasons and a refusal by some customers to pay for gas in rubles.

In response, EU countries have rolled out cash support for consumers facing rising bills and lined up new supplies of natural gas by pipeline from Norway and Azerbaijan and in liquefied form that comes by ship from the U.S. and Qatar.

While gas storage is full for now, an exceptionally cold winter and the loss of remaining Russian gas could easily extend the gas crunch until winter 2023-24. In the meantime, consumers are businesses are facing sharply higher utility bills that have led to some companies simply shutting down unprofitable production in energy intensive areas such as fertilizer and steel.

Two consecutive quarters of falling output is one common definition of recession, although the economists on the eurozone business cycle dating committee use a broader set of data including employment figures.

The commission indicated the job market was likely to hold up relatively well despite shrinking output over the winter, forecasting an increase in the unemployment rate from 6.8% this year to 7.2% next and a decrease to 7% in 2024.

Gentiloni said the forecast was subject to risks from unexpected events like a complete cutoff of remaining Russian gas but that the economy could do better than expected if EU governments act together in dealing with the economy and the energy crisis. He cited a discussion over revising EU rules on limiting excessive government debt and deficits.

The downbeat numbers “are not only subject to huge uncertainty, but crucially policy dependent,” Gentiloni said. “If we are able to show, based also on the experience of the pandemic, that we are able to agree on a common policy strategy, this will have confidence on markets, on investments and may change the outlook for the better.”