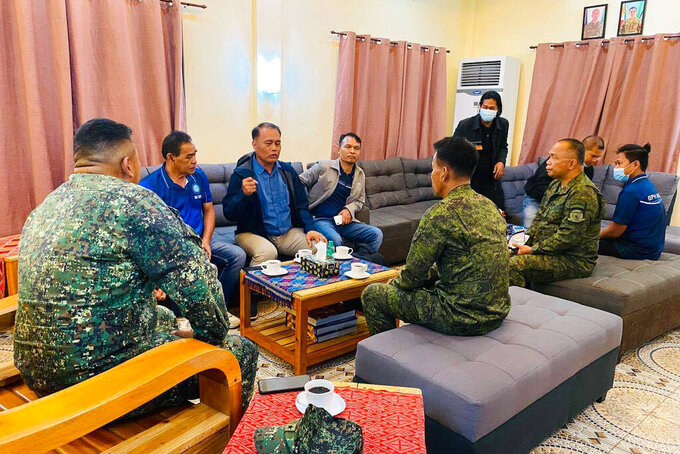 MANILA, Philippines (AP) — Philippine troops forged a ceasefire with Muslim guerrillas after 10 combatants were killed in clashes in a southern village and frantic efforts were made to prevent an escalation that could threaten a major peace accord, military commanders and the rebels said Friday.

The sporadic clashes erupted Tuesday and Wednesday in Ulitan village on the island province of Basilan, where emergency talks arranged by government and rebel mediators led to an indefinite ceasefire agreement late Thursday between army forces and Moro Islamic Liberation Front rebel commanders.

The conflict underscored the fragility of law and order in a southern region faced with a surfeit of loose firearms, private armies, crushing poverty and a long history of violence.

Government and rebel mediators were “able to stop the fighting with a dialogue between both sides,” regional military commander Brig. Gen. Arturo Rojas said. “It was an unfortunate event since both sides incurred casualties.”

Military and rebel commanders at the scene of the fighting accused each other of violating the 2014 peace agreement, which eased years of bloody and extensive fighting between government forces and the Muslim rebel front, the largest separatist insurgent group in the south of the largely Roman Catholic nation.

Under the 2014 peace pact, the Moro Islamic Liberation Front dropped its secessionist demand in exchange for a more powerful and better-funded Muslim autonomous region called Bangsamoro.

The five-province Muslim region, which includes Basilan, is now led by former guerrilla leaders under a transition period ending in 2025.

A military crackdown against an armed extortion group in Basilan in September displaced Muslim rebels and their families from Ulitan village, where army officers accused the insurgents of providing sanctuary to the extortionists.

The Muslim rebels denied the allegation and returned to their village this week with their firearms, which army officials said violated the peace accord because rebel weapons could only be kept in mutually designated Muslim rebel encampments, which did not include Ulitan, a civilian village. The rebels accused some soldiers of looting their homes, an allegation the military denied, and the arguments sparked the clashes.

Under the ceasefire pact, the Muslim rebels and their families would be allowed to return to Ulitan village but should restrict their firearms in their homes as they await “decommissioning” — a subtle term for the surrender of their firearms in exchange for livelihood packages — under the peace accord.

A security detachment to be manned by the military, police and the rebels would be established in Ulitan village to keep “lawless elements” out, Rojas said in a statement.

Nearly half of about 40,000 guerrillas have agreed to lay down their firearms and return to normal life under the peace pact. Thousands of other rebels have kept their firearms while waiting to be subjected to a years-long “decommissioning process.” The process has been delayed amid complaints that former rebels have failed to receive promised cash and other incentives from the government.

Amid this week’s clashes, Naguib Sinarimbo, the interior minister of the Bangsamoro Muslim autonomous region, and other officials expressed concern that the violence could escalate and asked the rival sides to stand down.

Western governments have welcomed progress in years of peace talks between Manila and Muslim rebels that have turned major battlefields into potential growth centers in the south in recent years, in the homeland for minority Muslims who live in some of the poorest and least-developed provinces in the country.

Had the decades-old Muslim insurgency continued to flare in the southern Philippines, there were worries that large numbers of Muslim insurgents could forge an alliance with outside militant forces and turn the south into a breeding ground for extremists.