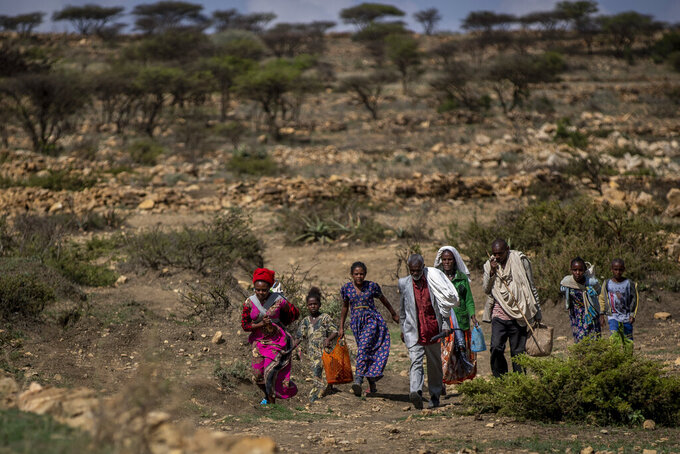 Ben Curtis, ASSOCIATED PRESS
FILE - People walk from a rural area towards a nearby town where a food distribution operated by the Relief Society of Tigray was taking place, near the town of Agula, in the Tigray region of northern Ethiopia on May 8, 2021. Ethiopia's lead negotiator in ongoing peace talks asserted Friday, Nov. 11, 2022 that 70% of the Tigray region is now under military control and aid deliveries have resumed to the area, but there is no immediate confirmation from aid workers or Tigray spokesmen. (AP Photo/Ben Curtis, File)

NAIROBI, Kenya (AP) — Ethiopia’s lead negotiator in ongoing peace talks asserted Friday that 70% of the country’s northern Tigray region is now under military control and aid deliveries have resumed to the area, but there is no immediate confirmation from aid workers or Tigray spokesmen.

National Security Adviser Redwan Hussein tweeted the information as the talks continued in neighboring Kenya, and as the United States applied pressure on Ethiopia’s government to swiftly deliver aid and basic services.

The peace deal says Ethiopia will “expedite” both aid and services to the long cut-off Tigray region of more than 5 million people, where food and basic medical supplies have run low.

Redwan said 35 trucks of food and three trucks of medicine have arrived in the northwestern town of Shire, which federal forces and their allies captured last month. That was before last week’s “permanent cessation of hostilities” in a two-year conflict estimated to have killed hundreds of thousands of people.

“Aid is flowing like no other times,” Redwan said, adding that services were being reconnected and flights allowed.

The Tigray lead negotiator, Getachew Reda, did not immediately respond to a request for comment.

A lull in the fighting earlier this year allowed about 8,000 trucks of humanitarian aid into the region, according to the United Nations, whose experts have found that Ethiopia’s government used starvation as a tool of war.

On Friday, spokespeople for the International Committee of the Red Cross and the U.N. humanitarian agency did not immediately confirm that aid trucks had arrived in Shire.

A humanitarian official, who spoke on condition of anonymity because they were not authorized to speak to the media, said their organization had not started aid deliveries because they were still assessing the security of roads and waiting for clearances.

The U.S. State Department’s Bureau of African Affairs again called for aid deliveries to Tigray and the neighboring regions of Afar and Amhara, which also were affected by the conflict.

“Redwan Hussein said in Nairobi that by week’s end humanitarian aid would flow unhindered as agreed,” the bureau tweeted, adding that it was “waiting urgently for actions to respect and implement the agreement.”

The current round of peace talks in Kenya also addresses the disarmament of Tigray fighters amid concerns that Tigrayans would be left vulnerable to forces from neighboring Eritrea, which has fought alongside Ethiopian forces and is neither part of the talks nor explicitly mentioned in the peace deal.

The deal says Ethiopian forces will enter Tigray’s capital, Mekele, and take control of the region’s borders, airports, and highways.

Phone and internet connections to Tigray are still down, and foreign journalists and human rights researchers remain barred from the region, complicating efforts to verify reports from the area of ongoing violence. The peace deal calls for a monitoring mechanism, but it is not complete.