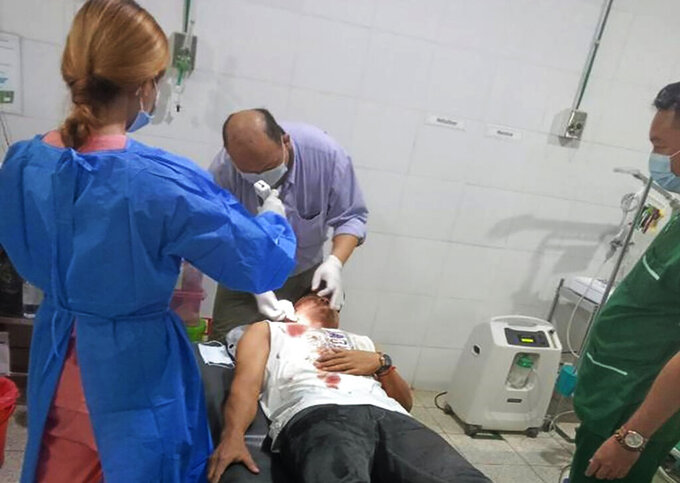 Uncredited, ASSOCIATED PRESS
In this photo provided by the Military True News Information Team, medical aids treat an injured passenger of an airplane at a hospital in Loikaw, the capital of the eastern state of Kayah, also known as Karenni, Myanmar, Friday, Sept. 30, 2022. Myanmar’s military government accused rebel forces in the eastern state of Kayah of firing at a passenger plane as it was preparing to land Friday, wounding a passenger who was hit by a bullet that penetrated the fuselage. Rebel groups denied the allegation. (Military True News Information Team via AP)

BANGKOK (AP) — Myanmar’s military government accused rebel forces in the eastern state of Kayah of firing at a passenger plane as it was preparing to land Friday, wounding a passenger who was hit by a bullet that penetrated the fuselage. Rebel groups denied the allegation.

State television MRTV said the Myanmar National Airlines plane, carrying 63 passengers, was hit as it was about to land in Loikaw, the capital of the eastern state of Kayah, also known as Karenni.

It said Maj. Gen. Zaw Min Tun, a spokesperson for Myanmar’s ruling military council, said the shooting was carried out by “terrorists” belonging to the Karenni National Progressive Party, an ethnic minority militia battling the government, and their allies in the People’s Defense Force, an armed pro-democracy group.

“I want to say that this kind of attack on the passenger plane is a war crime,” he told MRTV by phone. “People and organizations who want peace need to condemn this issue all round.”

MRTV said the bullet entered the plane’s lower fuselage as it was flying at an altitude of 3,500 feet about 4 miles (6.5 kilometers) north of the airport. It said the injured passenger was taken to a hospital.

The state news agency released photos it said were of the bullet hole and the passenger being treated.

Myanmar National Airlines’ office in Loikaw announced that all flights to the city were canceled indefinitely.

The Feb. 1, 2021, takeover was met with peaceful nationwide protests, but after the army and police cracked down with lethal force on street demonstrators opposing military rule, thousands of civilians formed militia units as part of a People’s Defense Force to fight back.

The PDF groups are allied with well-established armed ethnic minority groups such as the Karenni, the Karen and the Kachin which have been fighting the central government for more than half a century, seeking greater autonomy in border regions.

Khu Daniel, a leader of the Karenni National Progressive Party, denied the government's accusation and said his party had not ordered its armed wing, the Karenni Army, to shoot at civilians or passenger planes.

“The military always blames other organizations for the shootings. Our armed wing didn’t shoot the plane this morning,” he told The Associated Press.

Government spokesperson Zaw Min Tun said it has been providing security around the airport and accused the KNPP and PDF of creating chaos in Loikaw by firing artillery into the city and the area near the airport.

Since the military seized power, there have been frequent clashes in Kayah between the army and local anti-government guerrillas near a base belonging to the government’s 54th Light Infantry Battalion, located south of the airport. State-run media reported last Christmas that the KNPP and PDF attacked a Myanmar National Airlines passenger plane with four 107mm rockets, which exploded about 2,000 meters (1.2 miles) east of the airport, injuring no one.

The Karenni Nationalities Defense Force, another ethnic rebel group, earlier advised against traveling on Myanmar National Airlines because it is state-owned, so its revenues go to the military, and the army uses it to supply its forces.

The information officer of the Karenni Nationalities Defense Force, who spoke on condition of anonymity to safeguard his personal security, called the government's allegation about Friday's shooting “nothing more than defamatory propaganda against the revolutionary forces by the Military Council.”

"The runway and the area of the airfield are surrounded by infantry battalions and high security areas. So to say that PDFs attacked the plane is only an accusation,” he said.