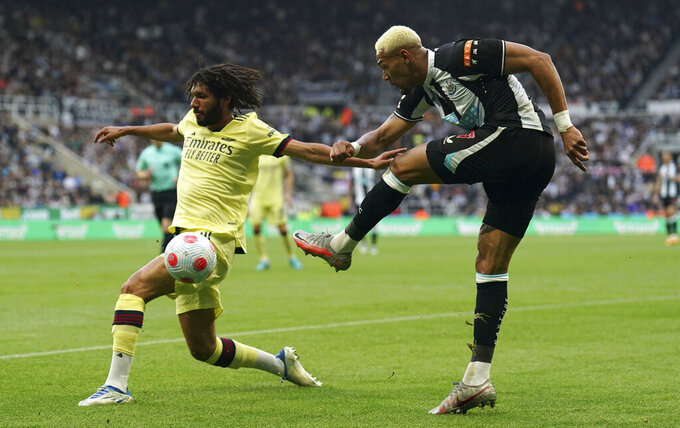 “Disastrous” was how Xhaka summed up Arsenal's 2-0 loss to Newcastle on Monday that left Tottenham in charge of the race between the north London rivals for a top-four finish in the English Premier League.

Then he went further.

“If someone is not ready for this game or too nervous, stay on the bench, stay at home, don’t come here,” Xhaka said, appearing to turn on some of his own teammates. “We need people to have the (character) to come here and play.”

If only Arsenal had shown some of that fight on the field at a rocking St. James' Park.

Mikel Arteta's young team buckled under the pressure of playing its biggest match of the season, with an own-goal by Ben White and a late strike by Bruno Guimarães capping a dominant display by a Newcastle team that might soon be a Premier League force to be reckoned with.

This night was all about Arsenal, though, and whether its players could keep Champions League qualification in their own hands. They couldn't.

“We could not cope with the game we had to play here,” said Arteta, who described Newcastle as “10 times better” than his team.

“The performance was nowhere near the level needed to play in the Champions League.”

Heading into the final round on Sunday, Tottenham occupies fourth place — two points above Arsenal in fifth — and just needs to beat already-relegated Norwich to guarantee a top-four spot. Given Tottenham's far superior goal difference, a draw will surely be enough against the league's last-placed team.

Arsenal will host Everton at the same time and knows a win still might not be enough to get back in the Champions League after a five-year absence.

Newcastle’s intensity proved too much for Arsenal, with the hosts well on top by the time White turned the ball into his own net in the 55th minute as he stretched to clear a left-wing cross from Joelinton.

Guimarães, the Brazil midfielder, ensured there would be no way back for Arsenal by adding the second in the 85th, side-footing home a loose ball after it rebounded to him off goalkeeper Aaron Ramsdale.

If it wasn’t for Ramsdale, the margin of defeat would have been much bigger.

“Newcastle deserved to win the match,” said Arteta, who appeared visibly stunned by his team’s under-performance. “They were comfortably better than us. We had nothing.”

Arteta needs a favor from Norwich. Otherwise, Arsenal will be playing in the Europa League next season.

“There is always a chance in football,” he said. “You have to be there if the chance appears.”

It was a second damaging defeat in a five-day span for Arsenal, which also lost at Tottenham 3-0 on Thursday.

Arsenal's implosion was Chelsea's gain. The result meant Chelsea, in third place, was sure of finishing in the top four and qualifying for the Champions League.

That's the level Newcastle might soon by playing now the northeast club is powered by funding from its Saudi Arabia owners. Finishing the season by winning seven of its last eight home games is a good sign for the future.

“I thought it was a brilliant all-round performance from us," Newcastle manager Eddie Howe said.

“One thing missing was that we hadn’t beaten a top-six team. And not only did we beat Arsenal, we were dominant throughout. But we’ll remain calm in this moment. We have to work incredibly hard to improve everything about the team in the summer and make sure we come back a stronger unit.”