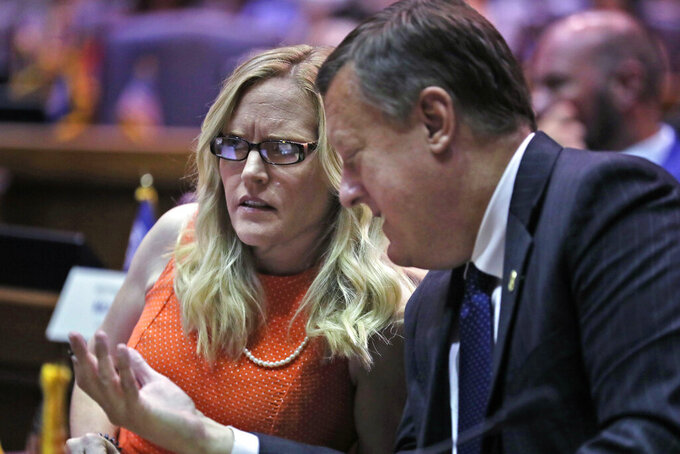 Sodrel won’t say how big a check he’s writing this time as he looks to emerge from a big Republican field of candidates in the May 3 primary for the district that GOP U.S. Rep. Trey Hollingsworth is giving up after six years, making him the only Indiana congressional incumbent not seeking reelection.

Sodrel, the 76-year-old owner of Jeffersonville-based Sodrel Truck Lines, is seeking a political comeback in the 9th District where he won a single congressional term in 2004 as he ran five times for the seat between 2002 and 2010.

With the most-prominent Republican candidates so far emphasizing similar conservative political stances, a significant factor could be whether Sodrel follows Hollingsworth’s playbook from 2016 when he and his father spent nearly $4 million to overwhelm GOP primary rivals.

Former state Sen. Erin Houchin of Salem and business consultant Stu Barnes-Israel of Greensburg have raised enough money to start airing television ads geared toward standing out among the nine Republicans seeking the party’s nomination in the strongly GOP district.

Houchin finished second to Hollingsworth in the 2016 primary race after being swamped by his big spending. She has lined up endorsements from several state and local Republican officials. Her campaign is bolstered by her ties to GOP activists from her previous stints as former U.S. Sen. Dan Coats’ southeastern Indiana director and the 9th District’s Republican chairwoman.

Houchin, 45, resigned her state Senate seat in February to focus on the congressional race about three weeks after Hollingsworth announced he wouldn’t seek reelection, which Houchin said gave her and other candidates little time to ramp up campaigns.

“Outside of what people spend on these races, and we have to do that to communicate with voters, what is most important is having a message that resonates with people,” Houchin said. “I’m the only candidate out of the nine in the last decade that has a proven record of fighting for our conservative values.”

Barnes-Israel, a 35-year-old Army combat veteran who served in Afghanistan, is presenting himself as a new face and political outsider with business experience through his work with global consulting firm McKinsey & Company and Chicago-based investment firm Citadel. He’s also picked up the endorsement of former Trump-appointed Secretary of State Mike Pompeo.

Barnes-Israel said he moved back to his hometown of Greensburg and decided to seek the congressional seat because of his background in national security and global economic issues.

“A lot of people can convey the rhetoric and talk about the issues, talk about how bad inflation is, how bad that supply chain crisis is, how bad Joe Biden’s handling of the economy has been, but not able to talk about real solutions,” Barnes-Israel said.

Sodrel was the Republican nominee for the 9th District seat in four consecutive elections in 2002-2008 against Democrat Baron Hill, with Hill winning three times. Sodrel last was a candidate in 2010 when he lost in the Republican primary to now-Sen. Todd Young in the largely rural district covering most of southeastern Indiana.

Sodrel touts his business success in his campaign and points to his two years in the U.S. House as an advantage over his rivals but doesn’t highlight that in his TV commercials.

“I’m not a political animal,” Sodrel said in an interview. “I haven’t spent my life in politics. I don’t need a job. I’m not doing this to feed my ego. If I didn’t think I could be the most effective for the district and the state and the United States, I’d stay home.”

Sodrel said he is largely funding his campaign now — and he has the wealth to do so. His candidate financial disclosure report lists the value of the trucking company he founded at between $5 million and $25 million, with a 2021 income of over $5 million.

Sodrel’s campaign and the others haven’t released information on campaign fundraising ahead of Friday’s Federal Election Commission filing deadline.

Indiana University civics professor Paul Helmke said he was surprised the campaigns have not been more intense as early voting has already started in the primary race.

Houchin’s status as the only female candidate and her extensive party ties could help her in what will likely be a low-turnout election since Indiana has no high-profile statewide primary races this year, said Helmke, who is a former Republican U.S. Senate candidate and Fort Wayne mayor.

Sodrel’s wealth could be a wild card in the campaign’s final weeks.

“Just the fact that he spent money in the past and he’s been in the office before, he’d be the one that you’d be concerned about,” Helmke said. “Primaries are tricky and crowded primaries are the trickiest.”