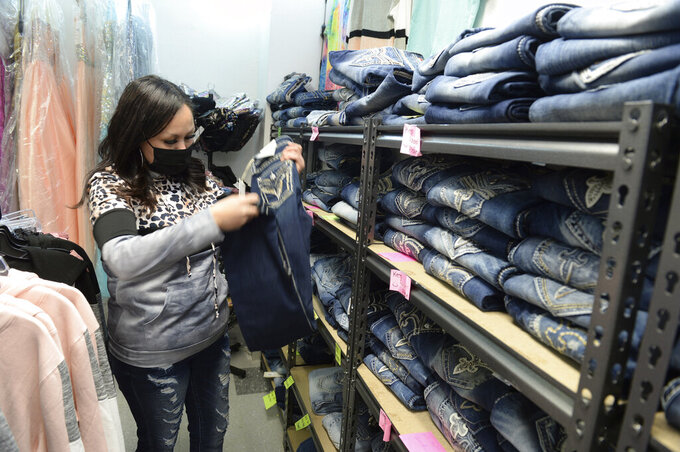 Rion Sanders, ASSOCIATED PRESS
Christina Holds The Enemy folds jeans at Rockin' Outlaw sports and western apparel store in Browning. The store was able to have in-store shopping again after the Blackfeet tribal government decided to reopen the reservation after being shutdown for a year for COVID-19 precautions. (Rion Sanders/The Great Falls Tribune via AP)

Like many places in Montana, the tribe’s schools adopted remote learning and businesses, bars and restaurants closed. But unlike the rest of the state, the Blackfeet Nation stayed closed for a year.

Students continued remote learning, the tribe implemented curfews, which were enforced by punishable fines, and businesses, restaurants and bars shut.

As many federal, state and local leaders emphasized opening the economy, the Blackfeet Nation’s COVID-19 Incident Command adopted the phrase, “Lives over the economy.”

That motto guided the tribe’s decision to close the east entrance to Glacier National Park, which typically attracts millions of visitors from around the world and boosts the tribe’s economy each year.

Despite their strict precautions and economic sacrifices, the Blackfeet Nation, like tribes nationwide, was hit hard by COVID-19. At its peak in October, the reservation had nearly 400 active cases. In total, the tribe lost 47 community members to the virus.

After implementing some of the strictest COVID-19 closures in the country, the Blackfeet Nation, like many tribes in Montana, has had great success in its vaccine rollout. Because more than 95% of adults on the Blackfeet Reservation have been vaccinated, the tribe was able to not only reopen the east entrance to Glacier National Park, but also open local businesses, restaurants and bars.

In its cautious reopening, the Blackfeet Nation boosts morale and the economy, while keeping people safe, the Great Falls Tribune reports.

One year ago, Victoria Day Chief was a senior at Heart Butte High School.

She worked as a teacher’s assistant and had plans to study nursing in Spain when she graduated, but those plans were derailed when COVID-19 entered Montana. She canceled her travel plans, and when schools went remote, she was laid off.

“My entire focus became protecting my family,” she said.

In October, Day Chief, 19, got a new job with the tribe to help them distribute stimulus money. But when things calmed down, she was laid off again. Now, since the tribe entered Phase 3 of its reopening, which allows businesses to operate at 50 to 75% capacity, Day Chief got a job as a players club rep at Glacier Peaks Casino.

Phase 3, or “New Normal,” went into effect on March 15 and allows schools to offer in-person learning, bars, restaurants and lodging to open and nursing homes can begin to have visitors in May.

“This just feels a lot more stable. It’s a lot easier for me to pay my bills,” she said, adding that she’s saving for college and hopes to earn a degree in nursing.

Glacier Peaks Casino is one of the largest non-government employers on the Blackfeet Reservation. Last year, the business had 250 employees, but when the reservation closed in March, the casino laid off 129 people.

After being closed for a year, Glacier Peaks Casino now employs more than 200 people. Dennis Fitzpatrick, CEO of Siyeh Corp., which owns the casino, said the business is operating at 50% capacity and can begin to expand, as long as people continue to follow guidelines.

Masks are required in the casino, employees sanitize surfaces and gaming machines are programmed to enforce social distancing. If someone is using one machine, the machines next to it will not accept a credit card because the gamers would be less than 6 feet apart.

“People follow the rules because this is their home. If we don’t, we could hurt people we love and our families. We all wear masks here because we know the consequences of not being safe,” he said.

While businesses are allowed to open at 50% capacity, some, like the Junction Café, have opted to continue curbside service instead of indoor dining.

Café manager Ann Magee, whose grandparents first owned the café in 1954, said financially, the closure “was terrible.” The café only has 12 tables, so with capacity limits, only six would be functional. For Magee and her small staff, opening the restaurant for indoor dining wasn’t worth it.

“We’re waiting to see how it goes for other businesses,” she said.

But hesitance to open hasn’t hurt business. Magee said the café fills about 60 orders each week and sometimes sells 100 patties in one day.

Rockin’ Outlaw, a boutique in Browning, was closed for three months. The store shut down last March for a month and a half and then had to close again in October when there were more than 400 active COVID-19 cases on the Blackfeet reservation.

The Blackfeet Nation recently announced students will have prom on April 17, and many have stopped in Rockin’ Outlaw to buy dresses and suits. Weasel Tail said while the store still isn’t as busy as usual, she’s thankful they can safely open.

Blackfeet Nation to memorialize loved ones lost to COVID-19

As the Blackfeet Nation looks ahead to the promise of reopening, the tribe plans to memorialize those lost to COVID-19.

Councilman Mark Pollock knows the devastation of COVID-19 firsthand. His son, daughter-in-law and their kids all had the virus, and he lost an elderly cousin to COVID-19.

John Murray, tribal historic preservation officer for the Blackfeet Tribe, talks about the teepee erected at tribal headquarters to serve as a memorial for the tribal members lost in the COVID-19 pandemic.

“We will definitely find a way to honor those who we lost. It’s been really hard for the community, because each death is a tragedy and we weren’t able to pay respects,” he said.

Robert DesRosier, who served as COVID-19 incident commander for the first four months of the pandemic, also caught COVID-19. While he survived, he said it will be hard for the community to recover from the devastation.

“We lost a lot. We put a lot of loved ones in the ground, and we haven’t mourned them. We haven’t had wakes; we haven’t had funerals. It really does have lasting effects,” he said.

To celebrate and honor community members who died of COVID-19, the tribe plans to install a permanent memorial near the Museum of the Plains Indian.

“Family is very close in Blackfoot. Uncles are like fathers, and aunts are like mothers. So when someone dies, it affects everyone. It affects the whole community,” said John Murray, Tribal Historic Preservation Officer

The memorial will include benches and the names of those who died. Each name will be illuminated, and a broken boulder in the center will signify the pain of the departed and community.