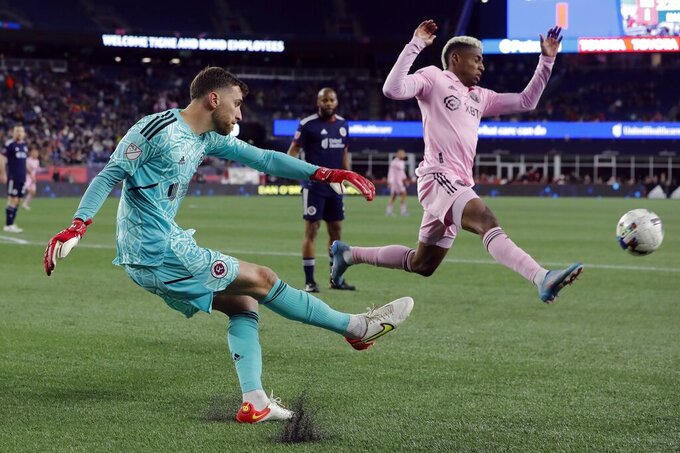 NEW YORK (AP) — Clint Demspey says he thinks American goalkeepers Zack Steffen and Matt Turner should consider going on loans for the start of next season to get sharp ahead of the World Cup if they are not going to be playing regularly for their Premier League clubs.

Turner is leaving Major League Soccer’s New England Revolution this summer for Arsenal, where Aaron Ramsdale displaced Bernd Leno as starting goalkeeper in September. Leno has started one league match since and is expected to transfer this summer.

Steffen has played in just nine matches this season for Manchester City, where he is Ederson’s backup. He appeared in just one Premier League game along with four in the FA Cup, two League Cup, one Champions League and the Community Shield.

“Whoever is going to win that spot is whoever is going to be playing more consistently. And if you’re not playing consistently for your club, then you need to go on loan and get those minutes, because it’s all about being sharp when that time comes,” Dempsey said Monday. “So it will be interesting to see what happens for Turner and Steffen in July and August, what decisions are made there.”

Dempsey, a midfielder and forward on the U.S. World Cup teams in 2006, 2010 and 2014, spoke during a news conference ahead of his induction into the U.S. National Soccer Hall of Fame on Saturday.

After missing out on the 2018 World Cup, the U.S. opens this year’s tournament in Qatar against Wales, Scotland or Ukraine on Nov. 21, plays England four days later and meets Iran on Nov. 29.

“I think that they do have the quality to get out of the group, they just got to be at full strength,” Dempsey said. “Not only the goalies, but I think all the field players, as well, they need to be playing for their club teams come August and try to get in that good run of form because that’s what you’re going to need to go far in that tournament."

He now works as an analyst for CBS, which has rights to U.S. road qualifiers, and was announced Monday as a broadcaster for Fox during this year's World Cup. Dempsey, on the field for the team that lost at Trinidad and Tobago and failed to reach the 2018 World Cup, watched the current group qualify on the last day in March despite a 2-0 defeat at Costa Rica.

"It was great for the country. Wish they’d done it in a better way in the sense of having a stronger last game, especially against Costa Rica, not having their strongest squad,” Dempsey said. "You would have (thought) that they would have put on a better performance there to really clinch it, even though they got the job done.”

The U.S. is likely to be at the World Cup without defender Miles Robinson, who tore his left ACL on March 7. In addition, midfielder Weston McKennie broke a bone in his left foot on Feb. 22, midfielder Gio Reyna was limited by leg injuries to one start in qualifying, Steffen missed games with back issues and Turner with a broken foot.

“I just hope that they can stay fit. Just seems like the injury bug has kind of hit them,” Dempsey said. “For them to have a chance, I just feel like they need to have everybody fit for selection so that they can be pushing for their strongest 11.”

He thinks a forward has to step up and earn the starting job. Ricardo Pepi scored three goals in qualifying but has gone scoreless in 24 consecutive games for club and country since Oct. 7. Jesús Ferreira, who scored the other goal by a forward in qualifying, leads Major League Soccer with nine goals this season.

Jordan Pefok tops the Swiss league with 22 goals this season but had only a small role in qualifying, and Haji Wright could be invited to camp after scoring in seven straight Turkish league matches.

“I think we’re missing a number nine. I think someone needs to kind of solidify that role and be the main guy,” Dempsey said, referring to the forward's number on the position chart. “Also, teams are going to be pressing us. I think that we need to do a better job of building out of the back with our center backs and and having that confidence to try to play.”