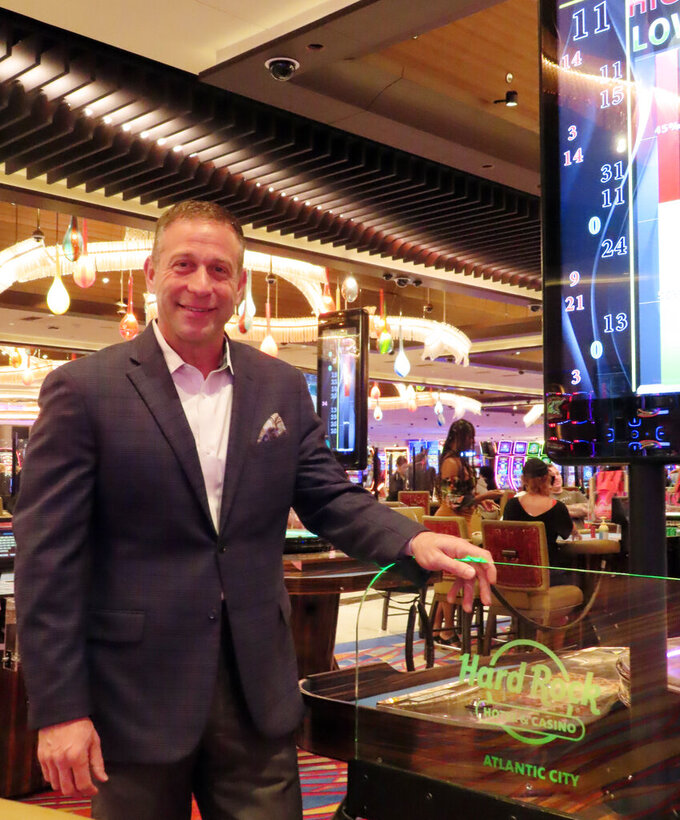 ATLANTIC CITY, N.J. (AP) — At 11:30 on a Saturday night, Anthony Faranca was meeting with a group of cleaning workers at the Hard Rock casino before they started their shift, introducing himself, asking about their jobs and about themselves.

It was a telling indication of how involved and accessible the casino's next president plans to be.

Hired in June as Hard Rock's general manager, Faranca is being boosted to the top job now that current president Joe Lupo is heading to Las Vegas to run the Mirage casino once the company completes its purchase.

He's being handed the city's No. 2 casino in terms of money won from in-person gamblers (No. 3 when internet and sports betting money are included); a resort that has upped the city's game in terms of live entertainment.

But Faranca's gaze extends beyond the casino's walls to the city around it: He's been meeting with city officials on safety and cleanliness initiatives, pledges to continue Hard Rock's history of supporting charitable and community groups, and realizes the casino's success or failure rests squarely on the shoulders of its employees.

That's why late on a busy Saturday night, with a million other things to keep track of, he was huddling with the cleaning staff.

“I make it a point to go to pre-shift meetings with all the different departments, to thank them for what they do and connect with them,” Faranca said.

A Philadelphia native, Faranca began his casino career in Atlantic City as a guest services manager at Harrah's and the Showboat. He worked in general manager roles at Philadelphia's Parx casino, the Palms in Las Vegas and at Maryland Live!, where he also was executive vice president, before joining Hard Rock.

Faranca says he has five core principles he plans to follow in his new job: Be the employer of choice in your market. Deliver exceptional hospitality. Clearly understand your property's strategy. Focus on the community. Have a commitment from ownership.

The casino is considering doing some hotel room and suite upgrades, and plans to diversify its entertainment lineup even more, he said.

Jim Allen, the global chairman of Hard Rock, has long pushed Atlantic City officials to make the city safer and cleaner, and has not hesitated to call them out when he feels conditions are poor. Faranca has already picked up that baton.

“I hope everyone rallies behind the idea of a safe and clean Atlantic City,” he said. “When guests visit the city, they need a safe visit.”

He has already had discussions with City Councilman Kaleem Shabazz about the need for safety and cleanliness in the city, and will serve on the board of the Atlantic City Police Department Foundation.

“He is very sincere and open to working with government,” Shabazz said. “He seems to have a good sense of how a partnership should go and what issues in the community should be dealt with. I feel a strong sense of his community engagement.”

Lupo, the outgoing Hard Rock president, called Faranca “a great guy, smart, with great experience. I could not be more pleased.”

His advice for his successor?

“Strong leadership is critical,” Lupo said. “Follow the direction of CEO Jim Allen, work compassionately and collaboratively with our wonderful Hard Rock team and the Atlantic City community, and even greater success will follow.”

With Hard Rock surging in the market, the question has been raised: Can it surpass the Borgata to become Atlantic City's top-performing casino?

Faranca smiles and refers to his five business principles.

“If I'm successful in those five core tenets, I'll let revenue take care of itself and see where the chips fall,” he said. “I have friends at the Borgata and I look forward to sparring with them as the years play out.”