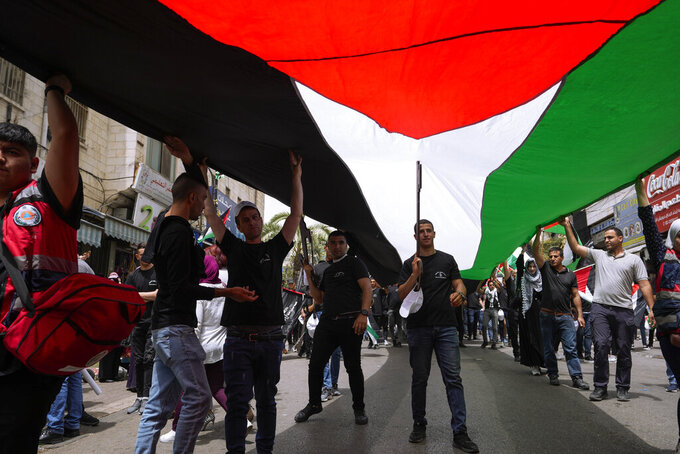 Majdi Mohammed, ASSOCIATED PRESS
Palestinians carry a large national flag during a rally marking the 74h anniversary of what the Palestinians call the "Nakba," or "catastrophe" referring to their uprooting in the war over Israel's 1948 creation, in the West Bank city of Ramallah, Sunday, May 15, 2022. (AP Photo/Majdi Mohammed)

TEL AVIV, Israel (AP) — A Palestinian gunman who is the brother of a prominent Palestinian militant died Sunday after being critically wounded in clashes with Israeli forces, according to the Israeli hospital where he was being treated.

Daoud Zubeidi was wounded in clashes with the Israeli military in the West Bank city of Jenin on Friday. Zubeidi is the brother of Zakaria Zubeidi, a jailed Palestinian militant who briefly became one of Israel’s most wanted fugitives after tunneling out of a high-security prison last year. He was eventually caught and returned to prison.

Police said a 47-year-old member of a special Israeli commando unit was killed in those clashes.

Daoud Zubeidi was taken to Israel's Rambam hospital where he was sedated and on a respirator and where his death was pronounced Sunday.

Israel has been carrying out raids in Jenin and other parts of the West Bank for weeks following a spate of Palestinian attacks against Israelis that have killed nearly 20 people. More than 30 Palestinians have been killed, most of them involved in attacks or clashes with the military. An unarmed woman and two apparent bystanders were also among those killed and rights groups say Israel often uses excessive force.

It was during the raids in Jenin on Wednesday that well-known Al Jazeera journalist Shireen Abu Akleh was killed after being shot in the head.

The Palestinians, including fellow journalists who were with her, say she was killed by Israeli gunfire. The Israeli military says there was an exchange of fire with Palestinian gunmen at the time, and it's unclear who fired the fatal bullet.

Abu Akleh was laid to rest Friday in Jerusalem in a mass funeral in which Israeli police pushed and beat mourners and pallbearers. Israeli police said they would conduct an investigation into the incident.

Abu Akleh's death and the shocking scenes from her funeral drew condemnations from around the globe and calls for an investigation into her killing.

Israeli Prime Minister Naftali Bennett, who has said there was a “considerable chance” that Abu Akleh was killed by Palestinian gunmen, said Sunday he stood behind the soldiers operating in Jenin.

“The state of Israel does not place any limits on the struggle against terrorism,” he told a meeting of his Cabinet. “We will continue in all the necessary actions to grant security to Israeli citizens.”

On Sunday, the Palestinians marked the 74th anniversary of their “Nakba,” or catastrophe -- the term they use to describe their mass displacement when hundreds of thousands of Palestinians fled or were forced from their homes during the war surrounding Israel’s establishment.

In the West Bank city of Ramallah, thousands of people, many holding Palestinian flags, gathered in public squares and stood at attention while a memorial siren rang out.