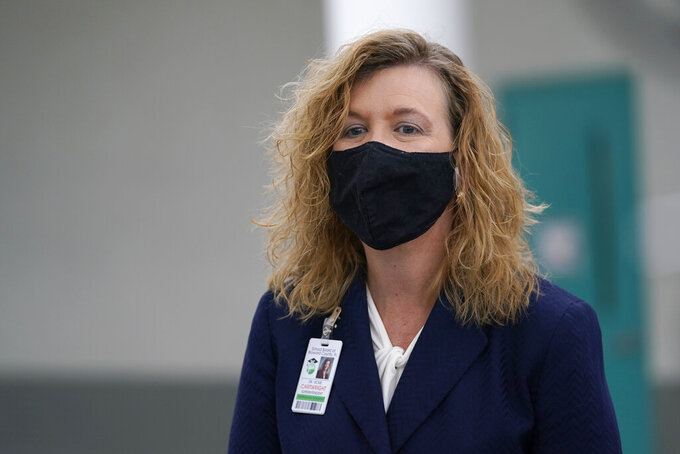 FORT LAUDERDALE, Fla. (AP) — The superintendent of Florida's second-largest school district was fired after a late-night motion from a board member appointed by Florida Gov. Ron DeSantis following a grand jury report into the Parkland school massacre.

The board voted 5-4 to dismiss Broward Schools Superintendent Vickie Cartwright, who has held the position since summer 2021, after board member Daniel Foganholi brought up the surprise motion Monday night.

The district has been embroiled in controversy since a grand jury investigation into the Parkland shooting also uncovered unrelated allegations of mismanagement. A former official was charged with contract-rigging and a former superintendent was charged with perjury, and four school board members were eventually removed.

Separately, audits reported in October of two contracts with long-term vendors — one for graduation caps and gowns and one for training and education management — found that parents and the district were overcharged by some $1.4 million.

Cartwright has frequently been criticized as failing to fix a district culture allowing waste and corruption, and the board unanimously reprimanded her in October and gave her 90 days to report on her progress.

All five board members voting against her in Florida's most Democratic-leaning county were appointed in August by DeSantis, a Republican who has said he wants to prioritize accountability in the county. Four of those will be gone next week, when they are replaced by board members who won election this month.

“Dr. Vickie Cartwright is a wonderful individual, but leading the nation’s sixth-largest school district requires a hands-on leader and someone that will make real change,” Torey Alston, who was elected last week, said in a statement. “Based on recent systemic issues, the Board decided to go in a different direction.”

Some board members said the motion was unfair since they had just asked Cartwright on Oct. 25 to address a long list of concerns.

“This action is impulsive and inappropriate at this moment, and I cannot support this,” member Sarah Leonardi said.

Cartwright, who was named interim superintendent in August 2021 and hired permanently in February, did not immediately comment on her firing. Her contract, which goes through late 2024, requires she be given 60 days notice of termination, and she is also entitled to $134,600 in severance.

Cartwright's predecessor, Robert Runcie, resigned in 2021 after perjury charges were brought against him.

Monday's meeting was publicly advertised, but there was nothing on the agenda suggesting that Cartwright would be fired, the South Florida SunSentinel reported. The newspaper said one public speaker who regularly attends board meetings addressed the issue and supported the dismissal.

The motion to fire Cartwright came at the end of the board’s discussion of two audits criticizing district practices.

“There are some great people who work for this organization, but toxic behavior continues to happen,” Foganholi, a DeSantis appointee, said in making the motion. “This is about accountability.”

Foganholi did not initially have enough votes, with two other DeSantis appointees speaking out against. They later agreed to it, with Kevin Tynan being the deciding vote after asking for a minute to think about it.

The dissenting board members included Lori Alhadeff, whose daughter was killed in the 2018 massacre at Marjory Stoneman Douglas High School, and Debra Hixon, whose husband also died in the shooting.

Former Stoneman Douglas student Nikolas Cruz, 24, was sentenced to life in prison earlier this month after pleading guilty to the massacre in 2021.

During a special meeting Tuesday, the board decided to keep Cartwright on for 60 days, the same length of time as her termination-notice period, while staffers begin a nationwide search for a new superintendent.

Broward’s school district has more than 270,000 students at 333 campuses and an annual budget of $4 billion.