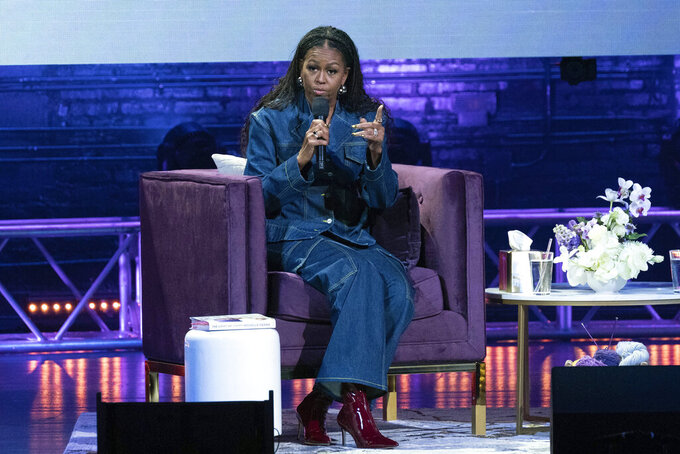 WASHINGTON (AP) — Michelle Obama says it helps to focus on what you can control when you feel out of control.

Among the things she could control during the death and isolation of the pandemic, the racial unrest and threats to democracy were her spools of yarn and her knitting needles.

She labels such thinking the “power of small," and she writes in her new book, “The Light We Carry: Overcoming in Uncertain Times,” that by focusing on a small task like knitting she was able to get through the worry, anxiety and stress of the past few unsettling years.

“The interesting thing about knitting and using your hands and making something is that it is meditative,” the former first lady said Tuesday night at the Warner Theater in Washington, where she kicked off a monthlong, six-city publicity tour to promote the book.

“In so many ways, it is like a faith,” she said, seated on stage with a friend, former daytime talk-show host Ellen DeGeneres, who engaged Mrs. Obama in nearly 90 minutes of often humorous conversation. “It's a thing that shuts your worrying mind and lets your hands take over.”

And therein lies the power, she said.

In the book, published Tuesday, she shares the contents of her “personal toolbox” — the habits and practices, attitudes and beliefs, and even physical objects that she uses to overcome her feelings of fear, helplessness and self doubt.

“This book is meant to show you what I keep there and why, what I use professionally and personally to help me stay balanced and confident, what keeps me moving forward even during times of high anxiety and stress,” she wrote in the introduction.

The 58-year-old wife of former President Barack Obama and mother of adult daughters Malia and Sasha wrote that the book, her third, is not a how-to manual, but rather is a “series of honest reflections on what my life has taught me so far.”

“Keep in mind, too, that everything I know, all the various tools I lean on, have come to me only through trial and error, over years of constant practice and reevaluation," she wrote. "I spent decades learning on my feet, making mistakes, adjustments, and course corrections as I went. I’ve progressed only slowly to where I am today.”

“The Light We Carry” is Mrs. Obama's first new work since the 2018 release of her bestselling memoir, “Becoming,” which has sold more than 17 million copies worldwide, by far the most popular book by a previous first lady or modern president, including her husband.

As first lady, she wrote “American Grown,” a book about the produce garden she had planted at the White House in 2009.

Mrs. Obama opened the tour in Washington and has events planned at Philadelphia’s The Met, Atlanta’s Fox Theatre, the Chicago Theatre and San Francisco’s Masonic before the tour closes at the YouTube Theater in Los Angeles.

Seated in a plush purple chair on stage at the nearly 100-year-old Washington theater, Mrs. Obama discussed her feelings after the 2016 election in which her husband was succeeded by Donald Trump. Coincidentally, Trump announced a third run for president during her appearance.

“If you guys recall, I said, ‘Don’t vote for this guy,'" she said, meaning Trump, who sought to undo much of Obama's record as president. “It hurt because you wonder — was it a rebuke of the eight years, the sacrifice we made? Was it complacency? What was it?”

The former first lady also discussed overcoming her fear of change and coming to the realization that she could not stand in the way of her husband's desire to run for president in 2008. He had given her veto power over his decision.

“Opportunity is on the other side of that,” she said, speaking of fear.

She also talked about the pandemic, saying her family handled it better than most because they were already used to isolation from the eight years they lived in the White House “bubble.”

She spoke about how hard it was as first lady — and still is — to make new friends she can trust, and how fun it is to watch her daughters “adult” as they share an apartment in California. The girls had returned to Washington to live with their parents during the pandemic.

Sasha had completed one semester at the University of Michigan before she came back home. Malia, who was enrolled at Harvard, spent her senior year at home and ended up missing out on a graduation ceremony because of COVID-19. So her parents staged a ceremony in their backyard, complete with commencement speakers.

“It was me, and Barack,” Mrs. Obama said, laughing. “We told her how lucky she was. She got us both.”