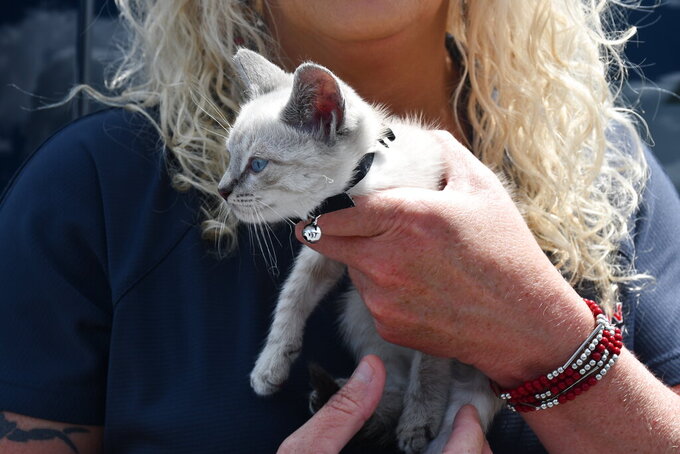 Kayla Hackney, ASSOCIATED PRESS
Lisa Reed and Heidi the kitten pose in front of Shelby Ingram's Toyota Highlander in Aug. 2022, where Heidi was stuck in Johnson City, Tenn. Heidi was rescued from under the car at Johnson City Toyota by automotive technician Cody Reece on Monday, Aug. 8, 2022. Heidi was adopted by another employee. (Kayla Hackney/The Johnson City Press via AP)

JOHNSON CITY, Tenn. (AP) — When Shelby Ingram’s Toyota Highlander first began making a strange, unidentified noise, she had no idea what was causing it.

That is until automotive technicians at Johnson City Toyota pulled a live kitten from underneath her car on Monday afternoon.

“I gave up and went in the house, and the next morning I got up, went out in the garage and there was not a sight, not a sound,” said Ingram. “I let the garage door up and there that noise started again.”

Ingram said she moved all the items in her garage around searching for the source of the sound, but she was unable to find anything. Though Ingram believed it could have been a cat, she was unable to locate it and eventually the weekend came and went with the sound still unidentified.

“I may have gone to one place Saturday,” said Ingram. “Sunday, I didn’t go anywhere, so the car didn’t move. But Monday, I had a lot of running to do.”

Ingram ran errands on Monday and at one point even had her doctor searching her car for the cat. Around noon, Ingram brought her Toyota Highlander to Johnson City Toyota to have her GPS serviced.

“The man that drove my car around after they worked on it got out and closed the door and kind of chuckled and said, ‘I thought I heard a cat,’” said Ingram. “And I said, ‘Okay, you heard it too. So there’s got to be a cat in that car.’”

The only person who didn’t hear the cat meowing was automotive technician Cody Reece.

The car was placed on a lift, and Reece said he began taking off panels and searching underneath the car when he finally found a kitten stuck on top of the gas tank.

“I took off all of the stuff to get to her and was reaching up in there and moving lines around, and she ended up getting free and jumped out the back side,” said Reece. “I caught her in mid-air, and that’s when she bit me for the first time.”

Reece said the scared kitten bit him three times before he and other employees were able to calm her down. In total, the kitten was stuck inside the vehicle for four days. Reece said it was the first time he had ever pulled a live animal from underneath a vehicle.

Another Johnson City Toyota employee, Lisa Reed, adopted the kitten and took her home. Reed said she believes the kitten is around 5 weeks old and is very affectionate. Reed said the kitten will live with her Dachshund Harley, though the two have not met yet.

“I named her Heidi for hiding in a Highlander,” said Reed.