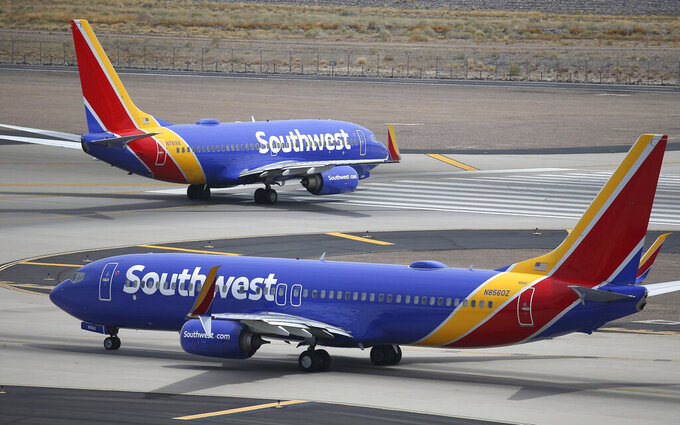 DALLAS (AP) — Southwest Airlines said Thursday that corporate travel is recovering more slowly than the airline had expected, although that is offset by continuing strong demand from leisure travelers even after the end of the traditional summer vacation season.

Southwest said revenue from “managed” business travel in the quarter ending Sept. 30 will be down 26% to 28% from 2019 levels. That’s a retreat from Southwest’s earlier forecast of a 17% to 21% decline, which the airline attributed to “softer” last-minute business-travel bookings since late July.

The Dallas-based airline said, however, that business travel has picked up after Labor Day -- as it usually does -- echoing similar comments by Delta Air Lines on Wednesday.

Southwest caters mostly to leisure travelers but has been making a big push to attract more corporate business, putting it in more direct competition with American, Delta and United.

Southwest offered the third-quarter commentary in a securities filing that generally repeated previous forecasts, including that overall revenue will be about 10% higher than the same period in 2019. Southwest said it had a good Labor Day weekend and revenue is still trending higher than in 2019.

“Although early in the booking curve, the company continues to experience strong revenue trends in fourth quarter 2022,” it said.

Shares of Southwest fell more than 2% in late-morning trading, while other major U.S. airline stocks rose by 2% to 3%.