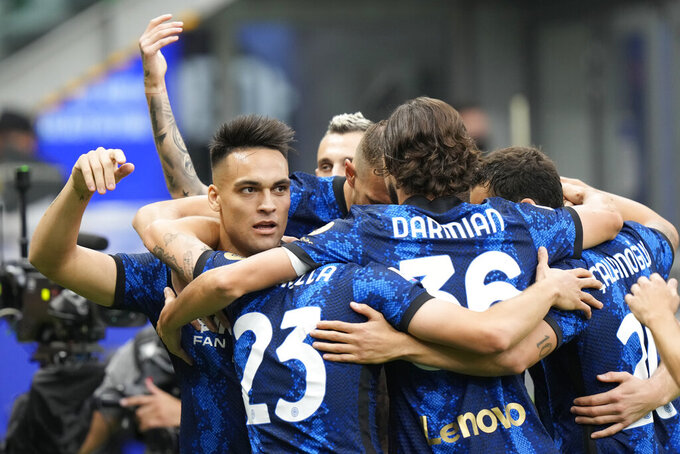 Inter won its first Serie A title in 11 years last season but its finances were hit badly by the coronavirus pandemic, as well as the club’s early elimination from European football.

It attributed its significant losses mainly “due to the complete lack of matchday income” because of shuttered stadiums, despite revenue of 364.7 million euros ($423 million).

“The club swiftly initiated a rebalancing policy with two primary aims: To ensure financial stability and to maintain a competitive team on the field,” Inter added in a statement on Thursday.

That policy saw coach Antonio Conte leave, reportedly because he was unhappy that he would not be able to build on his title-winning squad, and Inter sell two of its top players in Romelu Lukaku and Achraf Hakimi.

Inter’s owner, retail giant Suning, is also struggling because of the impact of the pandemic and halted operations at its Chinese football club.

But Inter remains positive for the upcoming season.

“The current season offers signs of recovery: Besides the partial reopening of stadiums, the positive summer transfer campaign and the signing of new global sponsorship contracts bear witness to the Inter brand’s constantly growing appeal,” the club said.

“These actions will make it possible to significantly reduce the group’s losses.”

Inter also secured a financing deal with Oaktree Capital in May that saw the American investment fund purchase a minority stake in the Serie A club and give the Nerazzurri a much-needed loan.

The deal reportedly entailed a cash injection of 275 million euros ($336 million), with a majority of that in the form of a loan.

Simone Inzaghi replaced Conte as coach. Inter lies second in the Italian league after six matches and has yet to lose.