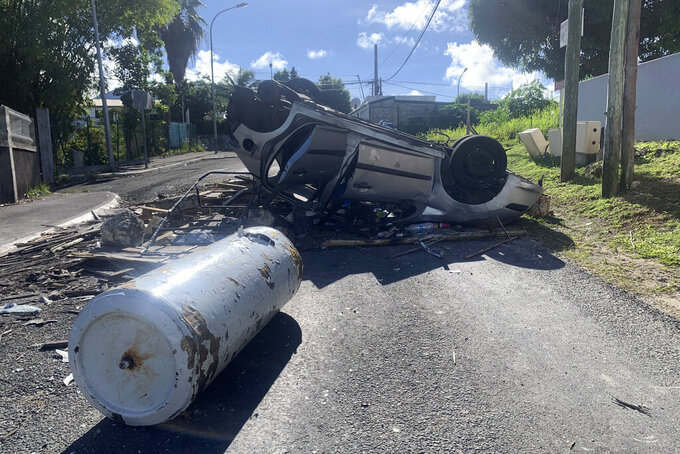 Elodie Soupama, ASSOCIATED PRESS
An overturned car is pictured in a s street of Le Gosier, Guadeloupe island, Sunday, Nov.21, 2021. French authorities are sending police special forces to the Caribbean island of Guadeloupe, an overseas territory of France, as protests over COVID-19 restrictions erupted into rioting. The protests have been called for by trade unions to denounce the COVID-19 health pass that is required to access restaurants and cafes, cultural venues, sport arenas and long-distance travel. (AP Photo/Elodie Soupama)

LE GOSIER, Guadeloupe (AP) — Schools closed across the French Caribbean island of Guadeloupe on Monday and France's prime minister appealed for calm and dialogue after protests against COVID-19 rules and vaccinations descended into days of rioting and looting.

The prefect of Guadeloupe said 11 people were arrested by police overnight Sunday into Monday. He said some patients who need to receive kidney dialysis treatment couldn't get access to a hospital and “are now in danger.”

“We have several patients" in the blockaded area of La Boucan, tweeted Patrick Portecop, head of the regional emergency service. “We are powerless.”

Demonstrations in Guadeloupe, an overseas French department of about 400,000 people, erupted over France’s mandatory vaccinations for health care workers and the country's COVID-19 health pass, which is required to enter restaurants and many other venues across France.

As they degenerated into rioting, an 80-year-old woman was hit by a bullet while on her balcony and at least two others were injured, according to local authorities. A weapons store was among businesses looted, the regional prosecutor said.

While mainland France has seen similar protests, demonstrators in Guadeloupe are also angry over deep-seated economic, social and racial inequality, and expanded their demands in recent days to include a general salary increase, higher unemployment benefits and the hiring of more teachers.

Guadeloupe's COVID-19 vaccination rate is 33%, compared to 75% nationwide, which authorities blame on false information about vaccines shared online. There is also distrust toward central authorities stemming from past health scandals.

French Prime Minister Jean Castex held an emergency video conference Monday with officials from the region. He called for calm and promised a dialogue with health care workers who are opposed to vaccination.

On Monday, the mood in Guadeloupe's main city of Pointe-a-Pitre changed from street to street. Police were clearing major thoroughfares of road blockades that have made movement difficult for days. Smoke wafted up from heaps of burning garbage. Nails, broken glass and tree trunks littered the streets and one woman rummaged through the charred remains of her home.

Outside the main hospital, striking workers have set up a camp against mandatory vaccinations for health workers, and sympathizers bring food.

Guadeloupe President Ary Chalus decried the looting: “We cannot destroy what we built together.” But he noted that the riots are "about more than mandatory vaccination," and lamented on television that the central French government hasn't responded to requests for economic support “as fast as they sent in law enforcement” to quell the rioting.

“There is a situation that is very explosive, there is a very local context. There are tensions that we know about that are historic,” French President Emmanuel Macron said Monday, adding that "the vaccine is the best protection, and to not cede to lies or manipulation. ... Public order must be maintained. Guadeloupe has the right to calm.”

The nearby island of Martinique is facing a general strike that started Monday over virus rules and long-standing grievances with the mainland.

Angela Charlton and Sylvie Corbet contributed to this report from Paris.