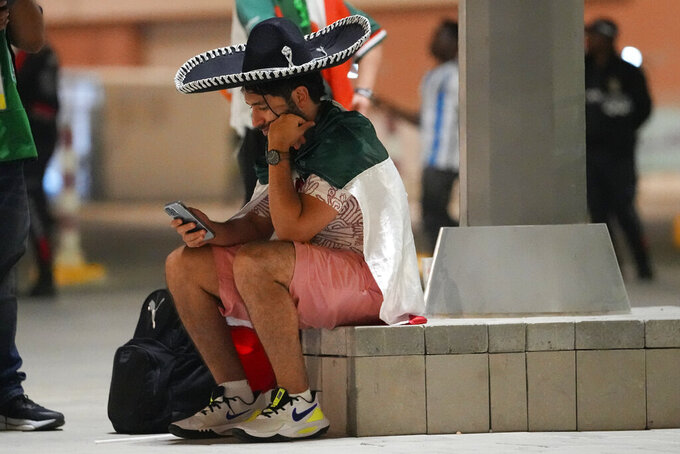 DOHA, Qatar (AP) — Mexico’s inability to score — or stop Lionel Messi — has put the team on the edge of missing the knockout stage at the World Cup for the first time since 1978.

Mexico has gone without a World Cup goal for 384 minutes since their second group stage match at the 2018 tournament in Russia. The scoring drought continued Saturday night in Qatar with a 2-0 loss to Messi and Argentina, dropping El Tri to last place in Group C.

Mexico has one remaining game, against Saudi Arabia on Wednesday. El Tri can no longer win the group but needs to beat Saudi Arabia to have a chance of placing second and advancing to the round of 16 for the eighth straight World Cup. However, a win may not be enough. If Poland and Argentina draw in their final Group C match, or if Argentina wins, goal difference will determine who places second.

“We are hurt, but as long as the possibility exists, we must continue fighting,” defender Nestor Araujo said. “While there is a chance, we will fight.”

Mexico came to Qatar looking to advance past the round of 16 and play in an elusive “quinto partido” — a fifth game — something the team hasn't accomplished since hosting the 1986 tournament.

Without goals, Mexico had to depend on stalwart goalkeeper Guillermo Ochoa, who stopped Robert Lewandowski’s penalty attempt to preserve a scoreless draw in El Tri’s World Cup opener against Poland.

But Ochoa was helpless against Messi’s second-half blast from distance in the 64th minute on Saturday night. Enzo Hernandez added a second goal for Argentina in the waning minutes.

At the final whistle, Ochoa and Messi grasped hands, and the goalkeeper known by his nickname Memo affectionately patted a gloved hand on his opponent’s head. Ochoa did not speak to reporters after the game.

“We did our job and unfortunately we left with defeat,” Mexico forward Henry Martin said. “So it hurts, but tomorrow we have to be thinking about what’s next in the next game, because we have one last chance and we have to take advantage of it.”

It might be the final World Cup for both men, who in Qatar each joined an exclusive club of players who have been to five editions of of the tournament.

Like Argentina depends on Messi, El Tri have looked to Ochoa because of their sputtering offense. Ochoa’s save of Lewandowski’s penalty attempt added to a World Cup mystique that started when he fended off six Brazilian shots — including a dangerous header from Neymar — in a group-stage draw against the hosts in the 2014 World Cup.

But Ochoa's efforts couldn't hide a lack of offense. The last two players who scored for Mexico, back in the group stage in 2018, were Javier “Chicharito" Hernandez and Carlos Vela, who weren't on the roster for Mexico in Qatar.

Mexico coach Gerardo “Tata” Martino, who is from Argentina, drew criticism for his roster choices, including the snub of Chicharito, Mexico's all-time leading scorer who hasn't played for his national team since 2019.

El Tri has never beaten Argentina in four attempts at the World Cup, and Martino’s worst defeat as Mexico coach was at the hands of his countrymen in September 2019, when Lautaro Martínez scored a hat trick in a 4-0 win.