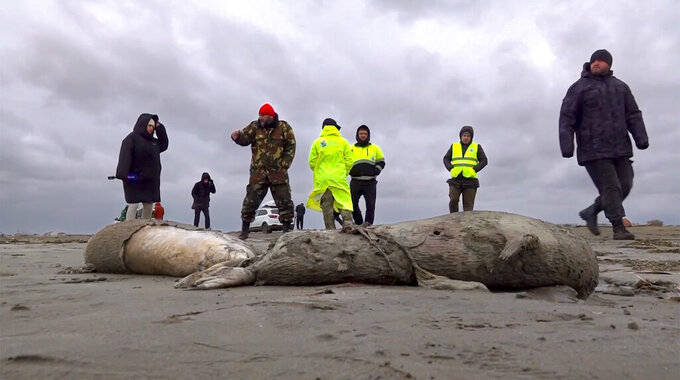 Uncredited, ASSOCIATED PRESS
FILE - In this image taken from footage provided by the RU-RTR Russian television on Sunday, Dec. 4, 2022, journalists and Interdistrict Environmental Prosecutor's Office employees walk near the bodies of dead seals on shore of the Caspian Sea, Dagestan. A top Russian environmental official said Monday that the thousands of dead seals that washed up on Russia's Caspian Sea coast likely died from oxygen deprivation. (RU-RTR Russian Television via AP, File)

Officials in the republic of Dagestan, which has a long coastline on the world's largest inland body of water, said this week that 2,500 or more seal corpses have been found recently.

Svetlana Radionova of the natural resources watchdog agency Rosprirodnadzor said on Russian state television that hypoxia is being seen as the most likely cause and she said that scientists are investigation whether natural gas emissions in the Caspian could account for low oxygen.

The Caspian Sea has extensive natural gas reserves that are being tapped increasingly.

Radionova said a similar mass death of seals — about 2,000 — was recorded in Dagestan and neighboring Azerbaijan in 2000.