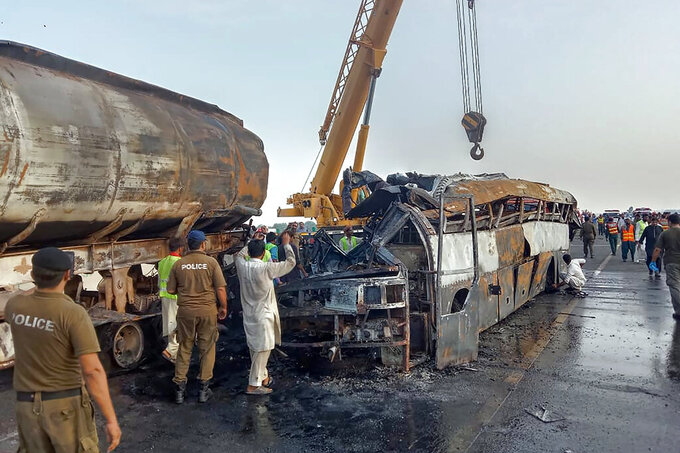 Uncredited, ASSOCIATED PRESS
Police officers and workers remove the wreckage of a bus that collided with an oil tanker along a highway in Uch Sharif near Multan, Pakistan, Tuesday, Aug. 16, 2022. A truck rammed into a minibus on a highway in eastern Pakistan overnight, causing a fire that killed and injured numerous passengers, a rescue official said Monday. (AP Photo)

MULTAN, Pakistan (AP) — A passenger bus rammed into a fuel truck on a highway in eastern Pakistan before dawn on Tuesday, igniting a fire that killed at least 20 people, police and rescue officials said.

According to the officials, the accident happened near the town of Jalalpur Peerwala in Punjab province. The bus was traveling from the eastern city of Lahore to the southern port city of Karachi.

Tahir Wattoo, a local government official in Multan, the nearest district, said early indications were that the bus driver's negligence had caused the collision. The driver, who was also killed, slammed into the back of the fuel truck, according to photographs from the scene.

The injured were taken to hospital and at least six passengers were reported in critical condition, he added.

Some of the bodies were burned beyond recognition and DNA tests will be conducted to identify the remains before the bodies are handed over to the families, Wattoo also said.

Prime Minister Shahbaz Sharif offered his condolences in a statement and asked health authorities to provide the best possible treatment to the injured.

Deadly traffic accidents are common in Pakistan due to poor road infrastructure and disregard for traffic laws.