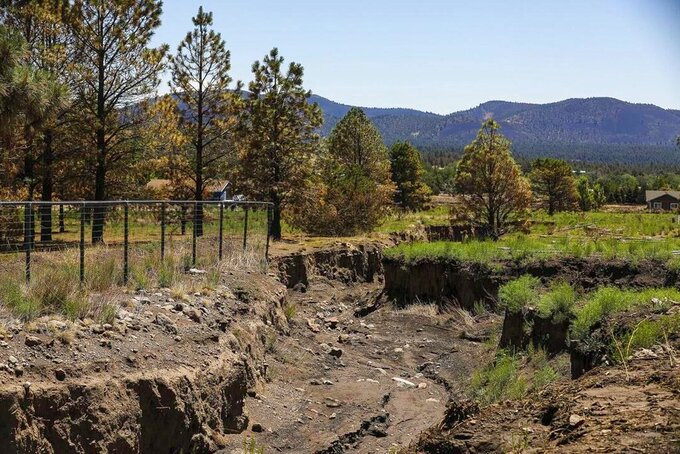 Rachel Gibbons, ASSOCIATED PRESS
This photo taken Monday, June 27, 2022, shows a wash that residents of a neighborhood outside Flagstaff, Ariz., have nicknamed the Mini Grand Canyon. The wash has deepened with flooding from heavy rain that fell over areas scorched by wildfires.(Rachel Gibbons/Arizona Daily Sun via AP)

FLAGSTAFF, Ariz. (AP) — Twelve years ago, a handful residents in the Timberline neighborhood east of Flagstaff declined to grant Coconino County the easements required for the completion of flood mitigation projects.

For Brian Skinner, who lives off a Brandis Way side street in the north area of Timberline, the consequence is watching as a deep gully he and his neighbors have nicknamed the Mini Grand Canyon cuts deeper and deeper into his driveway.

Currently, the Mini Grand Canyon is about 20 feet deep and as many feet wide. As it channels stormwater from the Peaceful Watershed, its headcut encroaches on the access road to Skinner’s property. It’s also exposed a Doney Park water line, requiring the line to be covered in concrete blocks for protection, and exacerbated flooding downstream.

According to Brandis Way resident Trina Kramer, the Mini Grand Canyon got its start after the destructive Schultz Fire flooding. At this time, Coconino County undertook a massive $30 million flood mitigation project that spanned five years and five watersheds.

The channels, alluvial fans and sediment basins that were constructed were designed to help control flood waters in the Timberline neighborhood. Their placement was dictated by the watersheds themselves, and in some cases, that meant running channels behind the lines of private property, requiring homeowners to grant the county easements in order to complete the project.

When a former resident refused the county mitigation projects that were recommended for the area, they instead “did their own attempted fixes” that diverted the flow of water, “caused a huge ditch” and flooded downstream neighbors.

“Then they wouldn’t allow the county to come in and fix it, put in concrete lines or block line mitigation,” Kramer said. “And it’s just gotten worse and worse and worse.”

Kramer said these past resident’s diversions also continue to cause flooding and road damage down Dunlap Road. She finds the whole scenario frustrating.

“It was their right to say no, that the local government cannot come onto their property,” she said. “The problem is that’s very selfish and inconsiderate of those downstream of the issue.”

Years after the fact, the original resident has moved out, and Kramer and Skinner are left with the Mini Grand Canyon, which continues to grow. During the monsoon activity over the weekend, Skinner said the ditch was noticeably deeper.

“Every time it flows, it just eats it a little more,” he said.

When compared to adjacent watersheds that received county mitigation, the difference is clear, Kramer said.

“The channels where the mitigation is work,” she said.

After the weekend’s flooding, she was pleased to see county crews out Monday morning re-grading the damaged portion of Dunlap Road and clearing debris from existing channels. Kramer said she had spoken with county officials who are working on a concrete solution for the flooding effects on Dunlap.

“We’ve had a ton of support from the county,” Kramer said.

But fixing the Mini Grand Canyon won’t be an easy task, if even possible. This late in the game, the erosion may not be “mini” enough.

“We’re going to look at if there are any immediate measures we can take to try to slow down the erosion,” said Lucinda Andreani, director of Coconino County Public Works. “I won’t say arrest the erosion, but slow down.”

The first step will be to revisit the issue that sprang up 12 years ago: consent. The Peaceful Watershed — where the Mini Grand Canyon is — is not the only area where residents declined mitigation. The same is true of the Copeland Wash farther south.

“We’re hoping that both the Copeland and Peaceful areas will reconsider.” Andreani said. “We’re going to push really hard to get federal resources to try to assist with long-term mitigation there.”

According to Andreani, the “on-forest” portions of mitigation systems, such as sediment-reduction facilities, are already complete. With residential agreement, the county could proceed to continue that mitigation system from the forest to the highway. But even if all went well and residents agreed to mitigation, there’s little the county can do to actualize such a system during the heightened flood risk of this year’s monsoon season.

“It’s a big process,” Andreani said, noting requiring the legal negotiation of easements and federal cooperation for funding. “Assuming everybody cooperates and signs the easements, at the earliest mitigation wouldn’t get constructed until next spring.”

Despite what seems like an obvious need to Kramer and Skinner, getting agreement from every resident on the wash between the forest and highway may not be as easy as it sounds.

Kramer said there’s a lot of distrust and feelings of isolation among the Timberline neighborhood.

“We still rarely see somebody out here who’s able to make a difference,” she said.

Still, Kramer remains hopeful that seeing the how effective county mitigation has been in normal circumstances, along with the way that the county has hastily conducted post-flooding repairs will help other neighbors realize that mitigation is “a good thing.”

“There was a problem before, and look, the day after they’re out here fixing it,” she said as the country road grader scraped through thick ashy mud on Dunlap Road. “This is going to make a difference for all of these homes.”