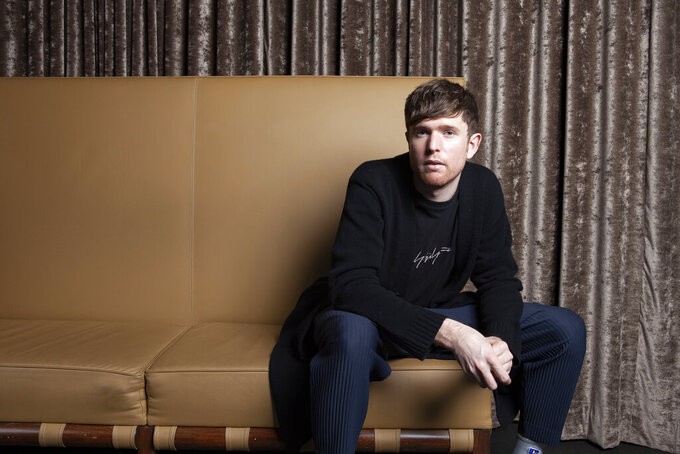 NEW YORK (AP) — In a year where every interaction came with a risk, people across the world were forced to reassess relationships. Grammy-winning recording artist and producer James Blake was no different.

“I could see around me that it wasn’t only me who was reevaluating friendships,” said Blake. “Having to reevaluate, ‘How many people do we need in our lives? Do I need this thought process anymore? What’s my purpose outside of this rat race?’”

These reflections steadily gave him inspiration as he created music that strayed from traditional love songs: tracks that touch on heartbreak, complacency, comparison and hope.

“The subject matter of the songs about heartbreak were usually about friendship,” said Blake.

His fifth studio album, “Friends That Break Your Heart,” was born.

Blake released singles from the album, starting with “Say What You Will” in July 2021. The song was accompanied by a music video featuring producer Finneas. In the video, Blake constantly finds himself in the shadow of Billie Eilish’s brother, starting at the Grammys, where Blake holds his single trophy while Finneas descends the stairs with his arms full of them.

Though Blake has worked with artists from Frank Ocean and Kendrick Lamar to Beyoncé, he believes this feeling of comparison is universal.

“Everyone, regardless of how successful you are, has someone like that, and we all are vulnerable to that feeling of comparison and am I good enough?” said Blake. “We’re constantly being reminded via Instagram of everybody’s success, so you almost have to filter your environment and shield yourself from the constant FOMO.”

The comedic tone of the music video is something Blake says was his girlfriend, “The Good Place” actor Jameela Jamil’s idea.

“She’s very comedic,” said Blake. “But traditionally my videos aren’t funny — they’re sort of heavy and emotional or abstract and I wasn’t sure if I could pull it off.”

The pandemic not only changed the way Blake was thinking, but in a more practical sense, the way he created the album.

“The kind of team I had around me was very small and tight-knit and just close to me, close friends — not ones that broke my heart,” he said.

Blake does a mixture of studio and at-home production, admitting that staying home is often the cheaper option for musicians.

Blake feels lucky that he’s already toured for 10 years, unlike some who were hit hard by the pandemic's halt of touring. All the musicians he knows are struggling.

“They might have been lucky enough to get on the property ladder and then the pandemic happened and they can’t pay for it,” said Blake. “A lot of people in the touring business as well were left with no purpose or income.”

This contrasts to a conversation he had at a record label, where he was told they were doing “better than ever.”

“We know that there’s a big imbalance in kind of who’s making the money, and live touring, it does slightly address that balance,” said Blake. “So I hope that some of those musicians, some of those people in the industry, they get back on their feet and understand I’m just rooting for them.”

Blake himself is excited to get back on the road. And even though the pace of society is beginning to pick back up, he hopes people will slow down enough to spend time with the 12 tracks on his album, featuring artists like SZA, JID and SwaVay.

“I think the way I would like people to hear it is that they at least cut out a section of time in the day to give it the attention that any album deserves,” said Blake. “We live in a fairly online world, so it’s like, ‘OK, unless I actually create an hour in my life to sit down and listen to this thing and only do that, it’s going to be difficult to actually take it in.’”