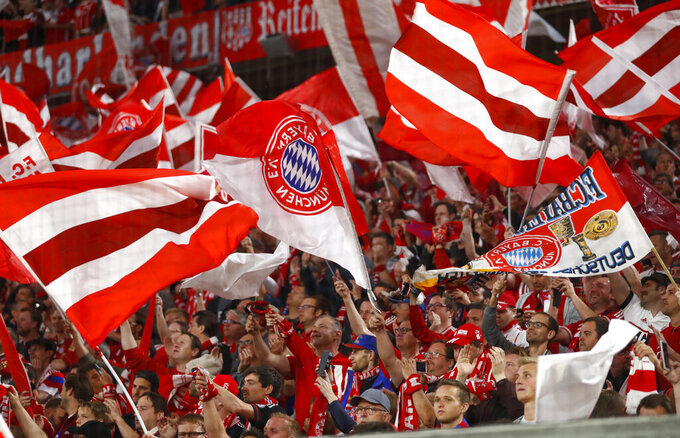 BERLIN (AP) — Bayern Munich is realizing that all publicity is not necessarily good publicity.

“I think very much has happened,” Kahn said at a panel discussion hosted by Bayern to answer its fans’ concerns over Qatar’s involvement in the club. “Because we’re sitting here today and discussing this very important topic.”

Kahn referred to “many meetings” that Bayern had had with Qatari officials and said “sports can change a lot.”

But pressed on what exactly had been achieved, Kahn was unable to give examples of any concrete action taken by the club or by Qatar at the club’s behest to improve working conditions for migrant workers in the country.

Qatar is due to host soccer’s World Cup later this year, but the buildup has been marred by allegations of human rights abuses against migrant workers with thousands of unexplained deaths and widespread exploitation of laborers.

Kahn said Bayern had recently met with Qatari officials in London and that he spoke to them about diversity and tolerance.

“These are the discussions that are very, very important to me personally,” Kahn said. “I think that’s how we can move forward step by step.”

“Of course, it doesn’t happen overnight,” Hainer said. “But democracy in Germany didn’t occur overnight. It was also a development process.”

Monday’s little-advertised panel discussion was the result of a call for dialog from fan representatives following Bayern’s tumultuous AGM last November, when Kahn, Hainer and other presidium members were booed for not permitting a debate of Bayern’s lucrative partnership with Qatar Airways.

Bayern’s players wear their airline’s logo on their jersey sleeves. The sponsorship agreement runs to 2023.

Christoph Heusgen, Germany’s former ambassador to the United Nations, hosted Monday’s discussion, which was not announced by the club on social media. There were no women on the panel. No media were present either, but anyone interested could watch after logging in to Bayern’s website.

Both Hassan Al-Thawadi, the secretary general of the World Cup supreme committee, and Max Tuñón, the head of the International Labor Organization in Doha, referred to improvements in migrant workers’ conditions in recent years. Tuñón’s ILO has been working with the Qatari government on labor reform since 2018.

Abdulla bin Mohammed bin Saud Al Thani, Qatar’s ambassador to Germany, pointed to the allegations of vote buying when Germany was awarded the 2006 World Cup and said there was undue attention on Qatar’s involvement in French club Paris Saint-Germain. He also disputed the reported figure of 6,500 migrant worker deaths in Qatar.

Stephen Cockburn of Amnesty International said it wasn’t possible to know exactly how many migrant workers have died constructing stadiums in Qatar.

“There have been thousands of deaths that have not been investigated,” Cockburn said, before suggesting the lack of checks were deliberate to avoid paying compensation to bereaved family members.

Michael Windfuhr of the German Institute for Human Rights suggested Bayern should be more open about its involvements with Qatar.

“It’s also important for companies to communicate openly about what you are doing, what you can do in a country like this,” Windfuhr said.

“Why are critical guest workers or journalists imprisoned in Qatar under questionable circumstances? If you are so serious about the reforms, then you can engage in a debate with them,” Ott said.

Another Bayern fan, Robin Feinauer, helped organize a public meeting in January 2020 titled “Qatar, human rights and FC Bayern” in Munich. It featured two migrant workers who spoke of their experiences working on stadium construction. Bayern was invited to that meeting at the time but didn't send a representative.

On Monday, Feinauer rued that there wasn’t enough time in their more than two-hour meeting to ask Kahn and Hainer all the questions they wanted to ask.