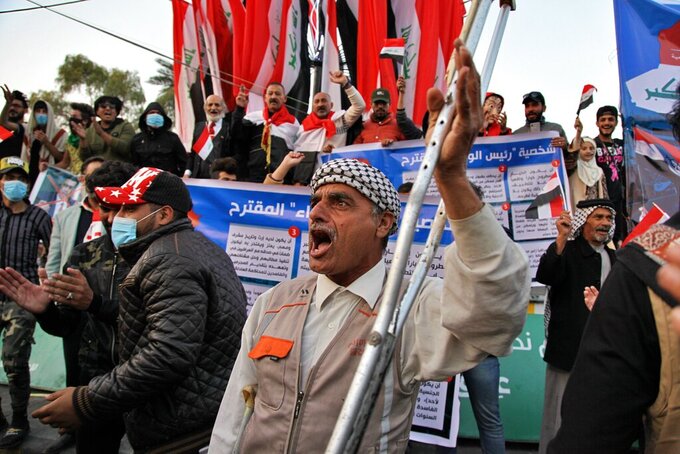 Khalid Mohammed, ASSOCIATED PRESS
FILE - Protesters chant slogans against Iran in Tahrir Square during anti-government demonstrations in Baghdad, Iraq, Dec. 26, 2019. Hayder al-Zaidi, an Iraqi activist, was sentenced Monday, Dec. 5, 2022, to three years in prison over alleged criticism of state-sanctioned militias, spurring criticism from human right monitors and local activists. Al-Zaidi, who was active in popular anti-government protests that began in October 2019, was sentenced in a criminal court in Baghdad over comments on Twitter that he maintains he did not write. (AP Photo/Khalid Mohammed, File)

BAGHDAD (AP) — At least two protesters were killed Wednesday in southern Iraq after security forces opened fire on a crowd demonstrating against a harsh prison sentence handed down against a young Iraqi activist over a Twitter post, local officials said.

Hundreds of protesters took to the streets in the city of Nasiriyah against a court ruling this week sentencing Hayder Hamid al-Zaidi, 20, to three years in prison over alleged criticism of state-sanctioned militias.

Security forces opened fire to disperse the protesters, killing two and injuring 17, according to a high ranking local government source and a medical source, both of whom spoke on condition of anonymity because they were not authorized to speak to the media about the matter.

Following the incident, Prime Minister Mohammed Shia al-Sudani, who also serves as commander in chief of the army, called a meeting of the Ministerial Council for National Security, which ordered formation of a committee to investigate the circumstances of the shooting, the official Iraqi News Agency said. Interior Minister Abdul Amir al-Shammari directed the police chief of the Dhi Qar governate, where Nasiriyah is located, to be replaced.

Zaidi, 20, who was active in popular anti-government protests that began in October 2019, was sentenced Monday in a criminal court in Baghdad over comments on Twitter that he maintains he did not write. He had been charged under a penal code section that outlaws publicly insulting any government institution or official.

The tweet in question, posted in January on al-Zaidi's account, posted a picture of Abu Mahdi al-Muhandis, the deputy commander of the Popular Mobilization Forces, an umbrella group of mostly Shiite paramilitary groups. It mocked his designation as a “martyr” by many in Iraq and described him as an “agent spy.”

Muhandis was killed in a U.S. strike in January 2020 that also killed Gen. Qassem Soleimani, the commander of Iran’s elite Quds Force.

Al-Zaidi was arrested over the tweet in June and released after 16 days on bail. He has maintained that his account was hacked.

Human Rights Watch deputy Middle East director Adam Coogle said in a statement, “Regardless of who posted the Twitter message, the Iraqi justice system should not be used as a tool to suppress peaceful criticism of the authorities or armed actors.”

He added that the harsh sentence levied Monday on al-Zaidi was a “sad reflection on the rule of law in Iraq” given that “dozens of officials and armed groups enjoy impunity for killing activists and protesters.”

Zaidi’s father, Hamid al-Zaidi, alleged that his son was tortured while detained in June. He told The Associated Press that he had expected his son to be slapped with a fine or released after Wednesday’s hearing and was shocked by the sentence.

“I am surprised that the thief who stole billions of tax money gets out of prison and Haidar is sentenced to three years because of a tweet,” he said. “What kind of justice is this?”

Al-Zaidi was referring to a high-profile corruption case involving the alleged embezzlement of $2.5 billion in tax funds. Nour Zuhair Jassim, a well-connected businessman, was arrested in late October in connection with the case but later released on bail.

Some political figures have also pushed back against the heavy penalty imposed on Haidar al-Zaidi. Independent Member of Parliament Ali Saadi sent a statement to the prime minister and public prosecutor following the verdict calling for Zaidi’s release and demanding that the Popular Mobilization Forces drop their case against him.