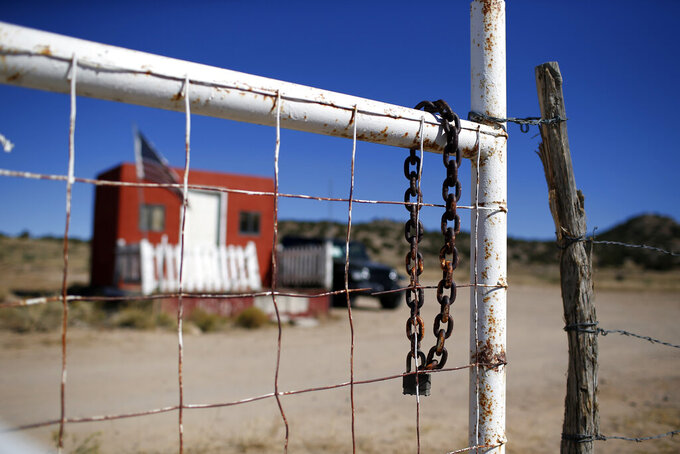 Andres Leighton, ASSOCIATED PRESS
A rusted chain hangs on the fence at the entrance to the Bonanza Creek Ranch film set in Santa Fe, N.M., Wednesday, Oct. 27, 2021. New Mexico authorities said they have recovered a lead projectile believed to have been fired from the gun used in the fatal movie-set shooting. (AP Photo/Andres Leighton)

SANTA FE, N.M. (AP) — New Mexico legislators expressed nearly unfettered support for state tax incentives to the film industry at a pubic hearing on Tuesday, in the wake of the shooting death last month of a cinematographer from gunfire on the set of a western movie production.

New Mexico offers a rebate of between 25% and 35% of in-state spending for video production that helps filmmakers large and small underwrite their work.

At the hearing, state economic development officials and consultants presented an analysis showing an eight-fold benefit to the local economy for every tax dollar spent on the film tax credit. Credits toward film productions were estimated at $109 million for the year ending in June 2021, and $52 million the prior year.

“D.N.P. — do not panic. New Mexico supports the film industry,” Democratic state Rep. Moe Maestas said, amid discussions about how to bolster the local film industry financially. His supportive comments were echoed by several other legislators in the Democratic majority.

Producers of “Rust” — where a gun fired in rehearsal by actor Alec Baldwin killed cinematographer Halyna Hutchins and wounded a director — registered to receive a state rebate but are unlikely to ever collect after filming was halted.

The Santa Fe County Sheriff’s Office is investigating the Oct. 21 death on a movie set that had inexperienced crew members, apparent safety lapses and a serious labor dispute. Authorities say Baldwin thought he was handed a gun without any live rounds before firing it during a rehearsal at the Bonanza Creek Ranch outside Santa Fe.

Workplace safety was not discussed at Tuesday's legislative hearing, and officials took pains not to mention “Rust” directly.

Amber Dodson, director of New Mexico Film Office, noted that legislative reforms in 2019 opened up greater incentives to film production companies that demonstrate long-term commitments to New Mexico through a 10-year contract on a qualified production facility. Netflix and NBCUniversal have secured that “film partner” status that lifts the cap on annual production rebates.

“These deals certainly create a long term sustainability to this industry," Dodson said. "So we're not a flash-in-the-pan place to go shoot a western anymore. We are a hub in an ecosystem that is long-term and sustainable.”

New Mexico Gov. Michelle Lujan Grisham, an ardent supporter of the film industry, has indicated that she'll await additional facts in the “Rust” investigation before considering any changes to state regulations.

Several companies came together to finance and produce “Rust,” including Baldwin’s El Dorado Pictures. The film, which is based on a story by Director Joel Souza and Baldwin, was financed in part by Las Vegas-based Streamline Global, which describes its business model as “acquiring films that offer certain tax benefits” that may “reduce the owner’s federal income tax liability from income earned from other sources.”

Leon Forde, managing director for video-sector consulting firm Olsberg SPI, said New Mexico’s local film production incentive is among the most generous in the US.

State Rep. Larry Scott of Hobbs, a Republican in the legislative minority, was dismissive of the new economic study and suggested New Mexico may be spending too much on a film industry that directly employs fewer than 8,000 people.

"My fear here is that we’ve sent the foxes to count the chickens,” Scott said.

Film production expenditures climbed to nearly $624 million for the year ending in June, an all-time high since the film tax rebate was introduced in 2003.