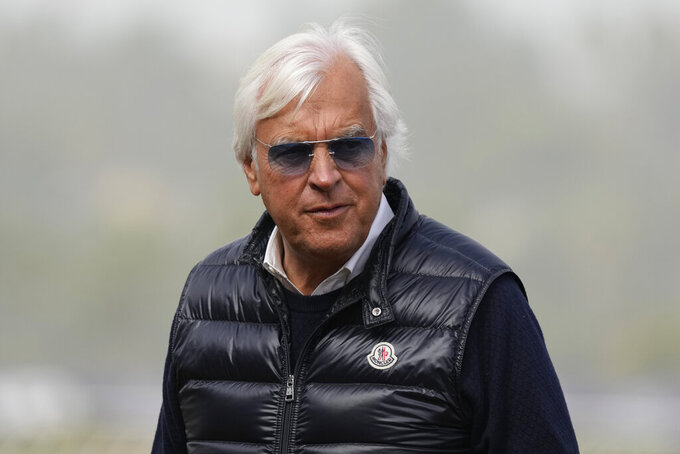 High Connection won the $125,000 Los Alamitos Derby by 1 3/4 lengths Saturday, giving trainer Bob Baffert his second victory on the card in his return to competition after serving a 90-day suspension.

“What a way to come back,” said Baffert, whose punishment by the Kentucky Horse Racing Commission ended six days ago. The suspension had been upheld at other tracks nationwide.

Baffert earned his fifth consecutive victory in the Los Alamitos Derby and seventh since 2014 at the Orange County track, where he first visited from Arizona at age 14.

“I love this place,” said Baffert, who later moved to California to further his career training quarter horses. “Quarter horses were my life and I knew if I could make it at Los Alamitos I knew this is it.”

Rhetoric, a 3-year-old colt, won the fifth race Saturday for the 69-year-old trainer’s first win in his return. Juan Hernandez rode both of Baffert’s winners.

In April, Baffert began serving the suspension for a failed post-race drug test involving Medina Spirit, who finished first in the 2021 Kentucky Derby and was later disqualified. Baffert wasn’t allowed on the grounds at any track and his horses were turned over to other trainers in his absence.

“I really missed it,” he said.

However, Baffert is still limited in where he can enter horses.

Last month, the New York Racing Association suspended Baffert for one year for repeated medication violations, although none of them occurred in New York. That punishment, which bars him from Saratoga, Belmont and Aqueduct, ends Jan. 26.

The two-time Triple Crown-winning trainer remains under a two-year ban by Churchill Downs that will keep him out of the Kentucky Derby until 2023. He is suing the Louisville track to have it overturned.

The punishments won’t keep Baffert from venturing back East. He has two horses — Taiba and Pinehurst — nominated to the $1 million Haskell on July 23 at Monmouth Park in New Jersey.

Baffert also is gearing up to move his Santa Anita-based stable south to Del Mar for the start of the track’s summer meeting on July 22.

Slow Down Andy was second and 19-1 shot Win the Day was another four lengths back in third.

Doppelganger, Baffert’s other entrant, was fourth in the five-horse field.