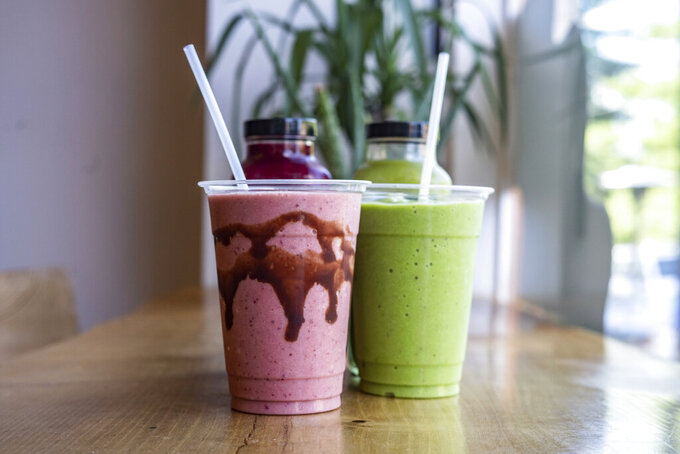 Maya Carter, ASSOCIATED PRESS
Pulp + Sprout has a selection of vegan juices, smoothies and foods in North Asheville, N.C., Aug. 4, 2022. The North Asheville neighborhood is flush with businesses promoting healthy lifestyles all within walking distance of each other. Pulp + Sprout, a juice bar and vegan café is one of the tenants helping build the area’s reputation. (Maya Carter/Asheville Citizen-Times via AP)

ASHEVILLE, N.C. (AP) — The “Wellness District” is a place where customer service means taking care of the customer from the inside out. The North Asheville neighborhood is flush with businesses promoting healthy lifestyles all within walking distance of each other.

“We have sort of an informal group called the Wellness District,” said Heather Cassidy, who owns Pulp + Sprout with her husband, Jim. “There are a lot of wellness-based businesses around here, and we definitely get together and collaborate and refer each other. … It makes a really nice area. People can literally walk from place to place and hit all those different aspects.”

Pulp + Sprout is taking care of guests in the food and beverage arena. The business specializes in cold-pressed juices, smoothies, and dishes using fresh, organic ingredients.

“It’s about the wellness aspect. We wanted to create a space that’s welcoming, inviting (and) wholesome environment, as well as all the ingredients,” Cassidy said. “Everything we use is organic, as much as possible — pure, really clean ingredients.”

South Slope:Ginger’s Revenge is back at it with a second taproom on the way

“We’re hoping to bring this wellness space to as many people as we can,” Cassidy said.

Nearly seven years ago, Pulp + Sprout — then named Elements Real Food — opened at the storefront, then owned by Jenni and Zack Bier.

The Cassidys regularly visited the café, so when the opportunity to purchase it arose, they were ready to invest. The restaurateurs also are partners of All Day Darling and Eldr, which opened recently in Asheville.

For the last three years, the Cassidys have evolved the business model and increased its presence in the community. A part of that rebranding effort was to update the interior décor and adopt a name that reflected the plant-based products inside.

Apart from providing a menu of scratch-made beverages and dishes full of fresh, locally sourced ingredients, the café’s shelves and coolers are stocked with local goodies. The Cassidys have slowly added features like the grab-and-go cooler, milk alternative products from the local partners, and cold-pressed juice subscriptions.

Scenes from Pulp & Sprout, a vegan juice bar and cafe in West Asheville.

Local and women-owned and operated businesses are intentionally represented in the retail area, including Rosarina Plant Shop and Dare Vegan Cheese.

“I feel really supported as a woman business owner in Asheville, both from my male counterparts to my strong female entrepreneurs around me,” said Gwendolyn Hageman, the owner of the artisan plant-based vegan cheese company. “It’s easy to make connections and build them with other women business owners because we see that in each other.”

“They’re so close to cheese you won’t be able to tell the difference,” Hageman said.

“It’s so good. We can’t keep it on the shelf,” Cassidy said.

Rosarina is a mobile plant shop, owned by Erika Mayer, that operates out of a vintage school bus. Rosarina’s plants are a part of Pulp + Spout’s décor, and customers may buy them at the café. They’re available at a few other spots in town – All Day Darling, Citizen Vinyl and Farewell.

“She comes in, tends the plants, beautifies our space with them but at the same time it’s her plant shop so they’re buying plants directly from her,” Cassidy said.

Cold-pressed juices are made in-house each morning using an industrial cold-press machine, Cassidy said. Commonly, customers request juices with electrolytes after working out or to address health issues, such as inflammation, or for overall wellness.

Two popular blends are Go Forth Green — made with kale, pear, cucumber, lemon, and ginger juice — and Breathe — made with carrots, orange, apple, lemon and turmeric.

Juice subscriptions of six-pack juice bottles have been popular and are available for local delivery each week.

Meals include sandwiches and salads.

“It’s like a mock chicken salad made with chickpeas. You can do it as a salad or as a sandwich. It’s a nice, hearty, filling meal,” she said.

Orange thyme cheesecake on an almond graham cracker crust was a recent daily special. Cheesecakes may be custom-made and special ordered.

Asheville has a strong vegan community and an industry that supports the demand for plant-based alternatives, Cassidy said.

Scenes from Pulp & Sprout, a vegan juice bar and cafe in West Asheville.

“The more the better, as far as the vegan community goes. Almost all restaurants have at least some vegan options, then there are some vegan restaurants,” Cassidy said. “A rising tide raises all boats so it’s a great community to be a part of.”

The number of customers seeking plant-based options is on an upward trend, Hageman said. Plant-based dining rooms and retail products working together are making a stronger industry.

“If anything, if it’s not vegan, I think health-conscious is becoming more a part of our foodie scene like before it was French cuisine and very bad-for-you food,” Hageman said. “Now, at least as a society and the younger generation is running toward taking care of their bodies and the environment and making healthier choices just in general. That’s the direction we’re going to continue to go.”