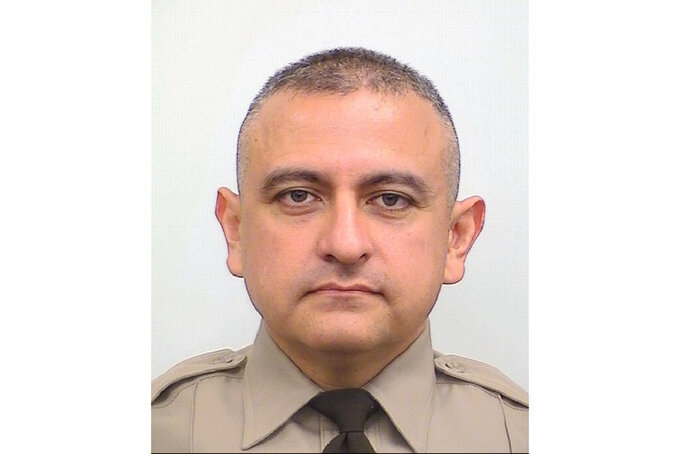 Uncredited, ASSOCIATED PRESS
FILE - In this undated file photo released by Maricopa County Sheriff's Office is Deputy Juan "Johnny" Ruiz. A Maricopa County sheriff's deputy who died after being beaten by a suspect is being remembered as man who lived his dream to protect and serve. Mourners and fellow law enforcement officers packed a church Tuesday, Oct. 19, 2021, in the Phoenix suburb of Avondale to honor Deputy Juan "Johnny" Ruiz. (Maricopa County Sheriff's Office via AP, File)

PHOENIX (AP) — A Maricopa County sheriff’s deputy who died after being beaten by a suspect was remembered as man who lived his dream to protect and serve.

Mourners and fellow law enforcement officers packed a church Tuesday in the Phoenix suburb of Avondale to honor Deputy Juan “Johnny” Ruiz. Only with the sheriff's office for three years, the 45-year-old Ruiz was an older recruit. But that didn't deter him from putting forth his best efforts.

Francisco Ruiz recalled during his eulogy how excited his younger brother was just to be accepted into the sheriff's training academy.

“I remember him telling me how hard the academy was. We were all so proud to see him achieve his dream,” Francisco Ruiz said.

Born in Hermosillo, Mexico, Ruiz was 4 years old when his entire family immigrated to the U.S. He was the baby of the family but also “the glue that kept us all together,” his brother said.

Authorities say Ruiz was attacked and left unconscious Oct. 9 while processing Clinton Hurley at a sheriff’s substation outside Phoenix. Hurley fled in the deputy’s patrol vehicle. He later was found after getting shot and wounded during an encounter with a Tonopah homeowner.

The deputy will forever remain in the hearts of his law enforcement family, Maricopa County Sheriff Paul Penzone said. He also expressed admiration for the Ruiz family and their decision to donate his organs.

“Evil did not defeat Deputy Ruiz on that day and evil will not defeat us today,” Penzone told the crowd. “His family made a selfless act of donating his organs so that many others will have a chance to live on and represent his legacy In his last act, he saved their lives.”

Hurley has since been released from the hospital. He was booked Wednesday into the Pinal County jail in Florence on charges related to previous incidents. The 30-year-old was on probation from a 2012 case in which he served time in prison after pleading guilty to attempted child molestation, according to court and prison records. He was also charged with theft of means of transportation in a May incident.