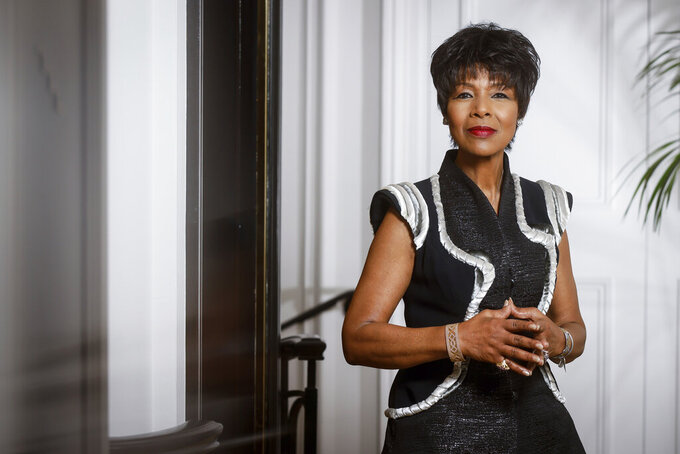 LOS ANGELES (AP) — Director Euzhan Palcy has made history more than a few times in her four decades in the movie business.

But she was driven by a conviction that she holds this day: “I was born to make movies.”

Now after some years away from the business, she is ready, at 64, to get behind the camera again. And what better way to start a comeback than with an Oscar? On Saturday, Palcy will get an honorary statuette at the annual Governors Awards gala, in recognition of her contributions to motion pictures. She’s being celebrated alongside Australian director Peter Weir, songwriter Diane Warren and actor Michael J. Fox, who is getting the Jean Hersholt Humanitarian Award, at the untelevised event.

“I felt like this was the right time for me to show up again,” Palcy, from Paris, told The Associated Press. “I was ready.”

Palcy was born in Martinique, in the French West Indies, in 1958, and from age 10 had set her sights on filmmaking even though it seemed like no one who was doing it, successfully at least, looked like her. Her imagination was sparked by Marcel Camus’ “Black Orpheus” and the films of Alfred Hitchcock, Fritz Lang and. In the mid-70s, she left for Paris, where she studied at the Sorbonne and got a master’s degree in film from the prestigious Louis-Lumière College. There she was encouraged to keep pursuing filmmaking by François Truffaut.

But she couldn’t find anyone to give her money to make her first feature, “Sugar Cane Alley,” even after she got an important grant from the French Government that would typically pique the interest of financiers. The film would be an adaptation of Joseph Zobel’s semi-autobiographical novel about Martinique in the 1930s, the Africans working the sugar cane fields and their white owners.

“I had a degree from the most famous film school in France and it was not enough,” Palcy said. “I was still Black, I was still a woman, and I was still young.”

Still, she managed to make “Sugar Cane Alley” from nothing and it went on to be a great success, winning the Silver Lion at the Venice Film Festival and a César for best first work. The most important thing to her, though, was that it resonated with the people of Martinique who told her they’d never seen themselves on screen before.

“Most people point it out that I was a pioneer. They say it doesn’t make you happy? And it’s not that, but it’s hard, it’s hard to be a pioneer. People think it’s a big deal and it’s great, but nothing is there and you pick a road and you pave it. That requires a lot of tenacity, a lot of fight, a lot of struggle, a lot of tears.

"I love the metaphor of a woman who is pregnant and the pregnancy is so hard on her and it’s difficult to give birth to that baby. Then once she does, she’s exhausted. That’s the way I felt when ‘Sugar Cane Alley’ came out. I couldn’t even enjoy the success of that movie,” she said. “But it made me stronger and even more determined to fight for my stories.”

Hollywood took notice and the exciting new talent behind the camera. Robert Redford invited her out to do the Sundance Director’s Lab, in 1984, and would be a sounding board as more offers came in. Life, for a moment, was a whirlwind of courting and offers.

Warner Bros. executive Lucy Fisher flew her to Los Angeles and gave her a grand welcome to try to get her to make a film with them. Palcy asked about adapting “The Color Purple,” though was politely told that Steven Spielberg had already set his sights on that. She decided on “A Dry White Season.” The film almost fell apart, though, when Warner Bros. brass decided after Universal released “Cry Freedom” that two apartheid movies was too many. MGM stepped in to make it.

Palcy has always been steadfast in her vision. Paul Newman was desperate to be in the film, but she was set on Donald Sutherland. She also convinced Brando, who had been retired for nine years, to take a role. For that, he received his eighth and final Oscar nomination.

After that, though, Hollywood became a mixed bag. She made “Ruby Bridges” for the Wonderful World of Disney and “The Killing Yard,” a TV film about the Attica Prison riot. But then about a decade ago, she decided she had to leave. She’d heard no, and that Black films don’t sell, a few too many times. And she’d been asked to make a few too many films that didn’t speak to her.

“I thought, I cannot betray my ideals,” she said. “So I thought I’d go away and put my energy into helping young filmmakers so I didn’t waste my time. I was just waiting for the right time to come back.”

In the ensuing years, she’d receive many letters and emails from people asking her where she was and why she wasn’t making films. Some of her films have gotten a second life too: “A Dry White Season” got a Criterion restoration and “Ruby Bridges” started streaming on Disney+.

Then earlier this year she had a feeling that the time to come back was now. Soon after, she got an honor in France and 24 hours later got the phone call about the honorary Oscar.

“I said, ‘My God, what is happening?’ It was worth the sadness and the struggle I had inside me for not being able to do my movies,” she said.

Now she just hopes that people don’t put her in a box, thinking she’s just a “political filmmaker.”

Palcy does want to make one thing clear: Though she is forthright about the struggles and adversity she faced, she wants people to know that she is also a very positive person.

“It was not a complaint,” she said. “But if they ask me about it, I will be honest.”