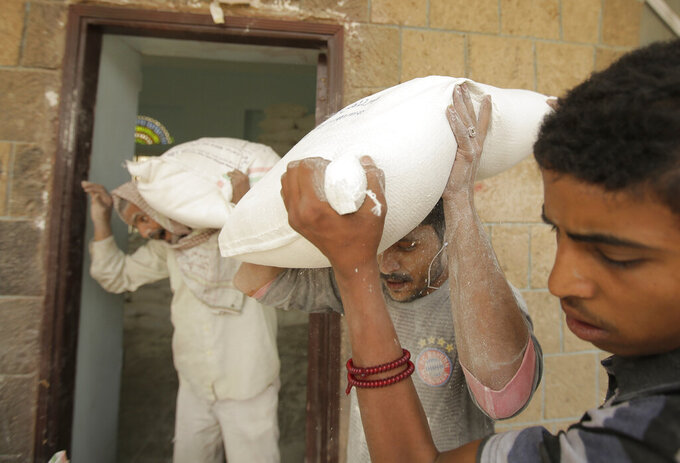 Hani Mohammed, ASSOCIATED PRESS
FILE - In this Aug. 25, 2019 file photo, workers carry food supplies provided by the World Food Programme for distribution, in Sanaa, Yemen. On Wednesday, Sept. 1, 2021, Yemeni and global rights groups accused both sides in the country’s civil war of using starvation as a tactic of war. They urged the U.N. Security Council to refer the opposing participants to the International Criminal Court to investigate alleged crimes in its years-long conflict. (AP Photo/Hani Mohammed, File)

CAIRO (AP) — Two human rights groups Wednesday accused both sides in Yemen's conflict of using starvation as a tactic of war. They urged the U.N. Security Council to refer the opposing participants to the International Criminal Court to investigate alleged crimes.

In a sweeping 275-page report, the Yemen-based Mwatana Organization for Human Rights and another group, Global Rights Compliance, said they documented airstrikes by the Saudi-led coalition that hit farms, water facilities and small fishing boats during fighting with the Iran-backed Houthi rebels.

The report also documented the Houthis' restrictions on humanitarian activities, which deprived civilians in areas under their control of “indispensable aid, including food.” It also documented the rebels’ widespread and indiscriminate use of land mines, which have killed and maimed shepherds and their livestock and prevented farmers from accessing agricultural land, according to the report.

The civil war in Yemen erupted in 2014, when the Houthis swept across much of the north and seized the capital, Sanaa, forcing the internationally recognized government of President Abed Rabbo Mansour Hadi into exile. The following year, Saudi Arabia and other Gulf states formed a coalition and entered the war on the side of Hadi’s government.

All warring sides are accused of atrocities in the conflict, which has killed more than 130,000 people and spawned the world’s worst humanitarian crisis.

Spokespersons for the Saudi-led coalition and the Houthis did not answer calls seeking comment.

The report focused on the impact on access to food and water caused by attacks and other conduct by the Saudi-led coalition and the Houthis in the provinces of Hajjah, Saada, Hodeida and Taiz between 2015 and 2021.

It said the warring sides have “severely impeded civilians’ access to food and water, and they acted in spite of widespread knowledge of the dire humanitarian situation in Yemen, where people, including children, were dying from starvation.”

Mwatana said it documented some 580 airstrikes by the Saudi-led coalition between March 2015 and Aug. 2021 that killed and injured thousands of civilians, and damaged and destroyed civilian property in 19 of Yemen’s 22 provinces. Ninety of these airstrikes hit farms, livestock, agricultural land, tools and equipment, food stores and vehicles in the past six years, it said.

The report accused the Houthis of “arresting and intimidating humanitarian workers, blocking aid convoys and illegally seizing the property of humanitarian organizations and workers.” Those actions forced the U.N. food agency in 2019 and 2020 to suspend its operations in Houthi-held areas, impacting some 850,000 people.

Mwatana said it documented at least 216 incidents of humanitarian obstruction by the Houthis across the country between March 2015 and March 2021, including 118 in the rebels’ stronghold, the Saada province on the borders with Saudi Arabia.

The two rights groups said further investigation is needed to identify the individuals who could be held accountable for the alleged use of starvation as a tactic in the conflict. They urged the U.N. Security Council to refer Yemen to the ICC to investigate possible war crimes in the country.