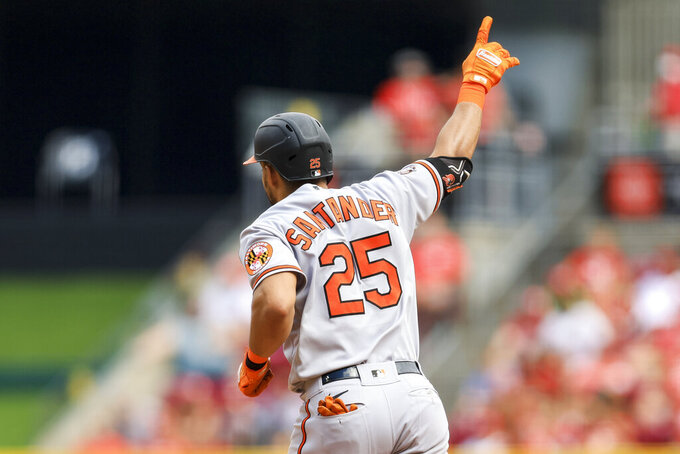 Aaron Doster, ASSOCIATED PRESS
Baltimore Orioles' Anthony Santander points to the stands as he runs the bases after hitting a solo home run during the eighth inning of a baseball game against the Cincinnati Reds in Cincinnati, Sunday, July 31, 2022. (AP Photo/Aaron Doster)

CINCINNATI (AP) — Brandon Drury reached 20 homers for the first time in his big league career when he hit a tiebreaking drive in the eighth inning to give the Cincinnati Reds a 3-2 win over the Baltimore Orioles on Sunday.

Drury broke a 2-2 tie in the eighth with his homer on a splitter off Felix Bautista (3-3).

Drury, whose previous high was 16 homers for Arizona in 2016. entered as a pinch hitter in the sixth inning.

Alexis Díaz (3-1) won despite allowing a tying home run in the eighth to Anthony Santander.

Buck Farmer got his first career save in six chances after an eventful ni nth inning.

“It has been a long time coming, six years now. I'm ecstatic. It is another thing I can mark off in my career,” Farmer said. “I was coming in regardless but when Brandon hit the home run, Lee Tunnel gave me a football play. He told me it was third and goal on the 1, and we're giving you the ball.”

Rougned Odor appeared to reach leading off on a bunt when first base umpire Larry Vanover ruled Odor beat the throw from first baseman Ryan Mountcastle to Farmer covering the base. While the Reds were out of challenges, a crew chief video review reversed the call.

Santander had three hits, including his 19th homer, and extended his hitting streak to 11 games.

“He was outstanding to the max,” Baltimore manager Brandon Hyde said. “We're just not doing enough offensively to help these guys out.”

Cincinnati took a 2-0 lead in the sixth when Joey Votto beat the shift with an RBI single to left and Kyle Farmer hit a sacrifice fly.

Cedric Mullins hit a sacrifice fly in the seventh.

Mancini hit leadoff for the first time this season and went 0 for 5 with two strikeouts. Mancini had 53 previous career starts in the leadoff spot.

Reds: RHP Hunter Strickland will return from the bereavement list on Monday.