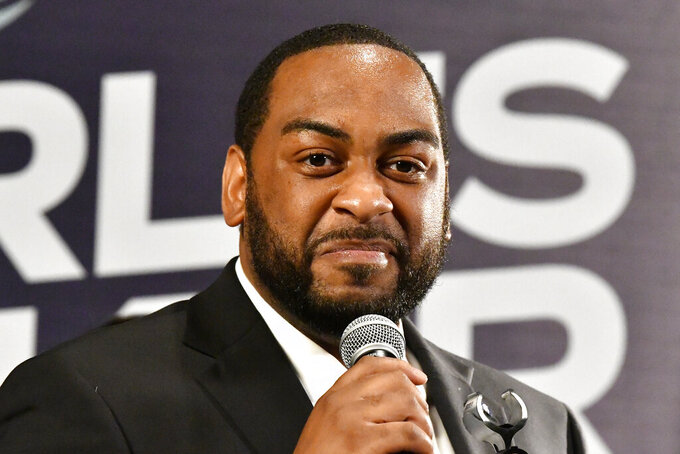 LOUISVILLE, Ky. (AP) — Republican U.S. Sen. Rand Paul looked past his fall opponent Tuesday to slam national Democrats, while his Democratic challenger doubled down on his progressive message and vowed to take the fight to the incumbent in a matchup featuring contrasting agendas.

The libertarian-leaning Paul coasted to victory over five little-known Republican challengers in his primary. Democrat Charles Booker, a Black former state lawmaker, defeated three primary opponents to become the latest nominee to try to snap the long losing streak of Kentucky Democrats in U.S. Senate races. The Bluegrass State hasn’t elected a Democrat to the Senate since Wendell Ford in 1992.

Paul, who is seeking a third term, immediately set the tone for his fall campaign, telling supporters in a video message that he was back in the nation's capital “battling the socialists and petty tyrants.” He didn't mention Booker, instead aiming criticism at the nation's top Democrats — President Joe Biden, House Speaker Nancy Pelosi and Senate Majority Leader Chuck Schumer.

“Kentucky and all of America deserve better than the massive spending, runaway debt and crippling inflation that Biden, Pelosi and Schumer are giving us,” he said. “I'm working every day to fight back, and I hope you'll continue to support me.”

“We’re actually going to lean in," he said in an interview on Kentucky Educational Television. "This is not a time to be moderate. You cannot moderately put a fire out. We’re going to be bold in fighting for Kentucky, and the results are going to show that is how you win.”

Booker vowed to take his message to areas he said have been overlooked or taken for granted.

“We’re going to win by engaging communities that don’t typically vote, communities that have been Republican for a long time but really just because Democrats don’t go and giving our folks a reason to turn out,” he said on KET.

Yet he faces a daunting task in trying to unseat Paul. Kentucky has tilted decidedly toward the GOP and Paul holds a commanding fundraising advantage over his Democratic challenger.

Paul, who ran unsuccessfully for president in 2016, has gained a national voice in promoting a philosophy of limited government and restraint in U.S. foreign policy. He’s known for going his own way at times in the Senate. Last week, Paul defied leaders of both parties and single-handedly delayed Senate approval of an additional $40 billion to help Ukraine and its allies withstand Russia’s invasion.

The senator’s libertarian leanings have included denouncing what he saw as government overreach in response to the COVID-19 pandemic. Paul has waged high-profile clashes with Dr. Anthony Fauci, the country’s top infectious disease expert, over the federal government’s coronavirus policies and the origins of the virus that caused the global pandemic. He has used those disputes to raise campaign contributions.

Booker gained the Democratic nomination after coming up just short in his prior Senate bid. In 2020, his campaign surged as his racial and economic justice message coincided with nationwide protests over the deaths of Black Americans in encounters with police. He barely lost the Senate primary that year to an establishment-backed rival who was routed by Republican Sen. Mitch McConnell in the general election.

Back with the same “hood to the holler” campaign theme, Booker was the frontrunner from the outset in this year’s Democratic primary. He promotes such social programs as Medicare for All and a basic universal income, saying it would uplift people extending from poor urban neighborhoods and struggling Appalachian towns to other corners of the state.

Paul, an ardent free-market advocate, sees such social programs as an encroachment by an overly expansive federal government.

After years of reinforcing his image as a political outsider, Paul could be on the verge of gaining more influence in the Senate if ultimately reelected to another term. The senator says he is in line to assume a committee chairmanship if the GOP wins Senate control after the November election. The Senate now has a 50-50 split, but Democrats have a slim edge because Vice President Kamala Harris holds a tie-breaking vote.