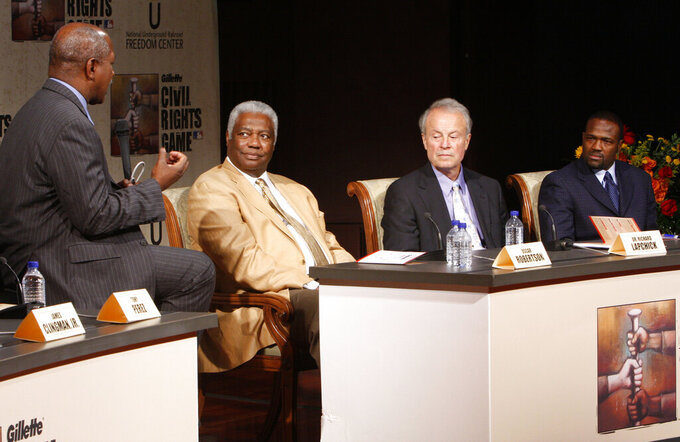 David Kohl, ASSOCIATED PRESS
FILE - In this June 19, 2009, file photo, Moderator Charles Ogletree, from left, ask questions to a panelist including, basketball Hall of Famer Oscar Robertson, Dr. Richard Lapchick, director of the Institute for Diversity and Ethics in Sport and former MLB player Harold Reynolds as they discuss issues during the Civil Rights Game "Baseball and the Civil Rights Movement" discussion at the National Underground Freedom Center, in Cincinnati. Lapchick shares some of the backlash his family felt that was directed at his father for signing the first Black player to an NBA contract. (AP Photo/David Kohl, File) 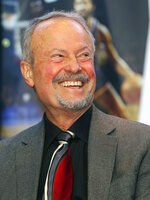 (EDITOR'S NOTE: Richard E. Lapchick shares some of the backlash his family felt that was directed at his father, former Knicks coach Joe Lapchick, for signing the first Black player to an NBA contract in 1950. The experience led him to his work today; Richard directs the Institute for Diversity and Ethics in Sport at the University of Central Florida.)

In 1947 my father and the owner of the legendary all-Black New York Rens basketball team made a presentation to the owners of the BAA, which would become the NBA, to integrate the league by admitting the Rens as a team.

Bobby Douglas' Rens had a rich rivalry with the Celtics in the 1920s and 30s. To my dad, Joe Lapchick — the New York Knicks coach in 1947 and who I suggest was an anti-racist a century ago — it made perfect sense.

There were those in the league — and more than a few fans — who didn't agree.

When my dad was star of the Original Celtics in the 1920s, there were no integrated teams. No white teams played against Black teams but the Celtics wanted to change that and developed a rivalry with the Rens that was one of the greatest in the history of the game.

In 1947, my dad thought because of his standing as a coach of the Knicks that the Rens would be admitted. But the Knicks founder and president, Ned Irish, came out and told my father and Bobby that the vote went against admitting the Rens. My dad told Bobby that he was considering resigning because he didn’t want to coach a team in the league that didn’t allow everyone to play. But the Rens owner admonished him, saying “you cannot resign because someday you may have the opportunity to bring about change.”

Not everyone was happy about the historic moment.

My earliest memory of the backlash as a child was looking outside my bedroom window in Yonkers, New York, where I was raised. I was five years old. I saw my father's image swinging from a tree with people under the tree picketing.

For several years I would pick up the extension phone in the house. My dad did not know I was listening to hear angry people shouting racial epithets at my father. I didn’t know what it meant but I knew a lot of people didn’t like this man who was my best friend. I also learned there was something terribly wrong with this world I was being raised in.

My dad learned about racism in America during the those Celtics-Rens games. He saw it up close when he watched the Rens board the luxury bus that their owner bought for them because Bobby knew that hotels in most cities would not accommodate his Black players. My father watched the Rens bring food onto the bus while the Celtics could eat wherever they wanted.

On three occasions he watched horrified as the Rens pulled into a gas station on the way to the next venue where they would play the Celtics. The Celtics’ car was in back of the bus and he saw the owner of the gas station come out with a rifle because he wasn’t about to serve gas from his lily white pumps to this group of Black players.

There were race riots that took place during three games when angry fans stormed the courts because they didn’t want to see white and Black players competing.

Because of the violence, nothing but net had a different meaning in those days. It wasn't referring to the sound of the ball going through the basket.

Owners of some arenas built nets around the court when violence was threatened so that angry fans couldn’t get to the players. The players sometimes packed knives in their socks to protect themselves.

My family's experience is a small part of the history that led up to the possibility of the NBA being led on the court by nearly 80% Black players — many of whom are led by the 15 head coaches of color.

As the league celebrates its 75th year, my father's efforts continue to be a prelude to all the sport and social justice measures and records set by the NBA along the way.

We should never forget it was not an easy path to reach this great moment.

Richard E. Lapchick is the chair of the DeVos Sport Business Management Graduate Program at the University of Central Florida. Lapchick also directs UCF’s Institute for Diversity and Ethics in Sport, is the author of 17 books and the annual Racial and Gender Report Card, and is the president of the Institute for Sport and Social Justice. Follow him on Twitter @richardlapchick and on Facebook.