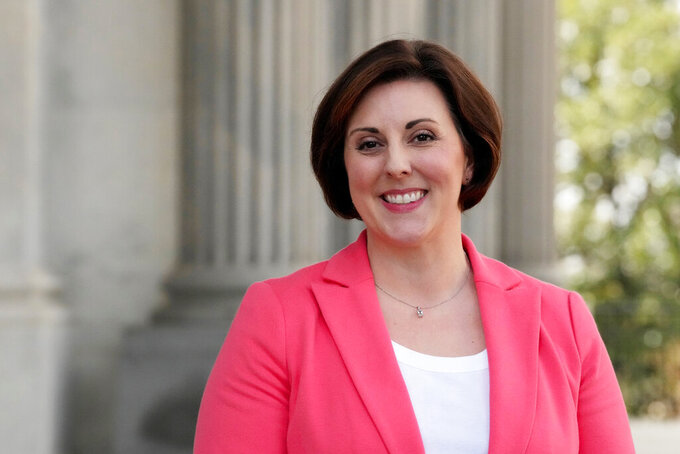 But Ellen Weaver faces one potentially serious obstacle: she lacks a master's degree, a new requirement to become Education Superintendent.

Weaver started on the advanced degree in April and vows to complete it before the November election. But it's unclear what might happen if she fails to do so, whether the issue could end up in court, and if that would open the door for a Democrat to win statewide office in South Carolina for the first time in 18 years.

“Tonight we saw that voters understand the real qualification for this job is leadership and a strong backbone," Weaver told reporters. "That said, I will fully fulfill all the legal obligations to hold this job. I will complete my master's degree in educational leadership in October ahead of the general election.”

In South Carolina, Republicans in the Legislature have sought to prevent transgender high school athletes from playing with the team of their gender identity and restrict local school districts from requiring masks. These issues have been pushed by conservatives across the country and are bringing more attention to the top administrators running public schools.

The current Republican Superintendent Molly Spearman — who endorsed Weaver's runoff opponent — has disagreed with members of her party. Weaver’s views align more with most of the state’s leading conservatives.

Weaver faces Democrat Lisa Ellis, a teacher and founder of education advocacy group SC for Ed who has an advanced degree. Also running is Green Party candidate Patricia Mickel, a teacher who told The Associated Press she has a master's degree.

Weaver enrolled in a master’s program in educational leadership from Bob Jones University in Greenville, the conservative Christian school where she has an undergraduate political science degree. The school website says the program typically takes 12 to 18 months to complete.

But students can set their own pace. The registrar’s office confirmed to AP that Weaver is a current student and plans to take an online class in the fall.

The advanced degree requirement dates to 2018, when 60% of voters rejected a constitutional amendment to have the governor appoint the education leader. Lawmakers also updated the qualifications for the job in companion legislation.

For the superintendent position in 2022, candidates must now meet new qualifications including a master’s degree and “broad-based experience” in public education as a teacher, administrator, or member of a school board or policy-making body.

Although the new qualifications appeared on the South Carolina Election Commission’s website, they received scant attention until The Post and Courier published a story after candidate filing ended. Several candidates dropped out while others like Weaver pledged to obtain advanced degrees.

Parties certify that candidates are qualified for primaries, and Republicans said Weaver's pledge of a degree before November was enough.

Beyond qualifications, Ellis' campaign said, experience is important. Unlike Weaver, the Democrat has spent time in the classroom and administration, spokesperson Leesa Danzek told AP.

“Regardless of whether Weaver is able to complete and obtain her required master’s degree, there are of course some more practical qualifications that I think many parents and voters would like to see in the leader of education,” Danzek said.

If Weaver gets her master's degree before statewide officers are inaugurated after November, there will be no legal question about her eligibility, said attorney Kevin Hall, who has been a legal counsel to the state Republican Party.

No one has sued Weaver over her qualifications, but both the degree and experience could be challenged. Weaver has no classroom or school administration experience and the South Carolina Education Oversight Committee she oversees does not set policy. She worked for former U.S. Sen. Jim DeMint before becoming president of the Palmetto Promise Institute think tank he founded.

Regarding concerns about Weaver’s experience, Hall added her think tank leadership “speaks for itself."

The superintendent race has featured themes seen elsewhere nationwide, including debates over COVID-19 classroom policies and a conservative outcry over critical race theory. That term is a way of thinking about America’s history through the lens of racism. It has become a political rallying cry on the right, but real-world examples of its teaching in classrooms have proved difficult to find.

While Kelly said “indoctrination” might be an issue in some parts of the state," he added that “at the end of the day that’s not in our state standards.”

He also said the governor has declared student mental health to be a crisis in the state, but noted that wasn't debated by the primary candidates. And, he said, voter turnout was “absymally low" — just 17% percent for the June 14 primary and 7% for the runoff two weeks later, according to state Election Commission data.