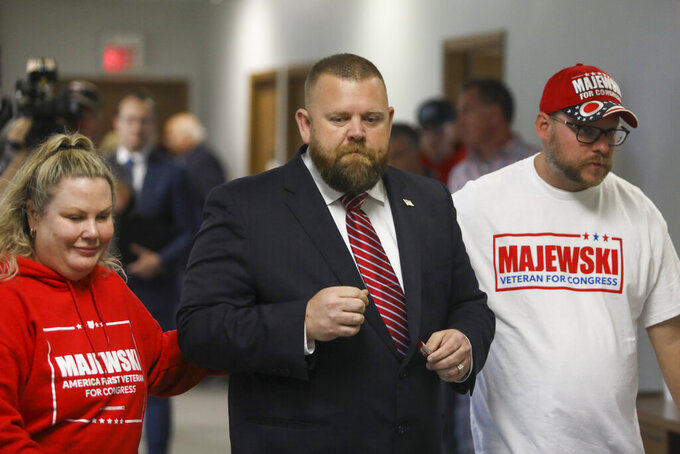 Phillip L. Kaplan, ASSOCIATED PRESS
Ohio Republican congressional candidate J.R. Majewski abruptly ended a news conference where he defended his military record, Friday, Sept. 23, 2022, in Holland, Ohio. Majewski has campaigned by presenting himself as an Air Force combat veteran who deployed to Afghanistan after the 9/11 terrorist attacks. Military documents obtained by The Associated Press through a public records request, indicate Majewski never deployed to Afghanistan but instead completed a six-month stint helping to load planes at an air base in Qatar, a longtime U.S. ally that is a safe distance from the fighting. (Phillip L. Kaplan/The Blade via AP)

HOLLAND, Ohio (AP) — Republican J.R. Majewski insisted Friday that he would stay in the race for a competitive northwest Ohio congressional seat after The Associated Press reported earlier this week that he misrepresented key elements of his Air Force service.

“I flew into combat zones often, specifically in Afghanistan, and I served my country proud,” Majewski said at a news conference.

The comments came amid growing fallout for Majewski, who repeatedly said he deployed to Afghanistan after the 9/11 attacks, but instead served a six-month stint loading and unloading planes while based in Qatar, according to records obtained by the AP through a public records request.

The House Republican campaign arm on Thursday cancelled nearly $1 million in advertising that it had planned to spend on Majewski’s behalf, a sign that the GOP was effectively giving up hope of unseating longtime Democratic Rep. Marcy Kaptur in a district that was recently redrawn to favor Republicans. Meanwhile, advocates for veterans questioned why Majewski has declined to offer proof, or even describe forays he made into Afghanistan.

Throughout his campaign, Majewski has repeatedly said he was a combat veteran who served a tour of duty under “tough” circumstances in Afghanistan, where by his account he once went over 40 days without a shower due to a lack of running water.

His latest remarks amounted to a far less robust description of what he says he did in the country. Majewski previously said he was deployed to the country, a term which refers to orders assigning servicemembers to a specific base or location.

On Friday he said his service involved flying in and out of Afghanistan from Qatar, but declined to offer additional details or proof because he said it was “classified.”

While based in Qatar, Majewski would land at other air bases to transfer military passengers, medics and supplies, his campaign previously said. The campaign did not answer repeated and direct questions from the AP before the story was published Wednesday about whether he was ever in Afghanistan.

They also gave no indication that he couldn't discuss his service because it was “classified,” as Majewski said.

“I was in multiple bases in Afghanistan and the time frame is clear, in 2002,” Majewski said Friday. “We flew in and out of the area of responsibility multiple times. It’s almost impossible for me to tell you where I was and on what day. That’s why my orders are listed as a classified location.”

Experts contacted by the AP say it is possible that Majewski may have entered the country. They also say Majewski is well positioned to prove it, though Majewski's campaign declined to do so Friday.

“It was hardly a secret that we were operating in Afghanistan,” said Don Christensen, a retired colonel and former military judge who once served as the Air Force’s chief prosecutor. “It would be pretty easy for him to find a supervisor or coworker that could verify if he was actually there. His (enlisted performance report) would have been signed by his supervisor most likely. That person would know if this was true.”

Scott Taylor, a former Navy SEAL sniper and Republican who represented Virginia in Congress, said he doesn't understand why Majewski's campaign refused to explain whether or not he ever went to Afghanistan earlier this week.

“Is it possible he went on some night flight to Afghanistan to drop off supplies? Yes it is possible," said Taylor, who was injured in a combat operation in Ramadi, Iraq, and had to be evacuated. "But again, he should have answered those questions right away.”

The experts said the discussion about whether he did or did not enter Afghanistan also obscures the broader picture: Majewski for months has presented himself as a combat veteran who deployed to Afghanistan, descriptors that indicate he came under hostile fire while stationed in the country.

The term “combat veteran” can evoke images of soldiers storming a beachhead or finding refuge during a firefight. But under the laws and regulations of the U.S. government, facing live fire has little to do with someone earning the title.

During the Persian Gulf War, then-President George H.W. Bush designated, for the first time, countries used as combat support areas as combat zones despite the low risk of American service members ever facing hostilities. That helped veterans receive a favorable tax status. Qatar, which is now home to the largest U.S. air base in the Middle East, was among the countries that received the designation under Bush’s executive order — a status that remains in effect today.

Majewski’s campaign previously said he calls himself a combat veteran because the place he operated out of — Qatar — is recognized as a combat zone. His military records state he has not received a combat medal.

“Everybody plays a role. But you have to be proud of what your contribution was and not try to step on someone else's,” said Taylor, the former congressman and Navy SEAL. “Barring him giving some evidence and filing a petition to get a combat ribbon, he’s not a combat veteran.”

Majewski's campaign has released several documents on social media that they say either back up his claims or refute parts of the AP's story. None of them address whether or not he was in Afghanistan.

One document from February 2003, when he was still enlisted in the Air Force, indicated Majewski was eligible to reenlist. However, the AP reported that when Majewski was discharged several months later, his paperwork indicated he was “considered but not selected for reenlistment.”

He also claimed that he provided the AP with a picture that shows him in Afghanistan. The picture, which is also on his campaign website, shows a group in fatigues who are inside what appears to be a shelter, but does not include any indicators of where it was taken.