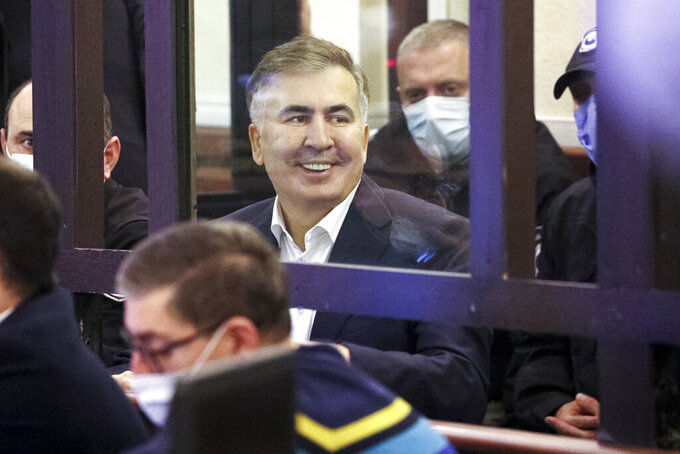 Irakli Gedenidze, ASSOCIATED PRESS
Former Georgian President Mikheil Saakashvili who was convicted in absentia of abuse of power during his presidency and arrested upon his return from exile, smiles standing inside a defendant's dock during a court hearing in Tbilisi, Georgia, Monday, Nov. 29, 2021. Saakashvili, who was president from 2008-13, left Georgia after the end of his second term and was later convicted in absentia of abuse of power. He was arrested on Oct. 1 after returning to Georgia to try to bolster opposition forces in the run-up to nationwide municipal elections. (Irakli Gedenidze/Pool Photo via AP)

TBILISI, Georgia (AP) — The imprisoned former president of ex-Soviet republic Georgia appeared in court Monday on charges of abuse of office, proceedings that triggered scuffles between his supporters and police.

Mikheil Saakashvili, who served as president in 2008-13, left Georgia for Ukraine after the end of his second term and was later convicted in absentia of abuse of power and sentenced to six years in prison. He was arrested on Oct. 1 after returning to Georgia to try to bolster opposition forces before nationwide municipal elections.

Saakashvili went on a seven-week hunger strike following his arrest, ending it on Nov. 19 after authorities agreed to transfer him from a prison clinic to a military hospital. His lawyers and doctors said it caused him neurological damage.

Monday’s hearings at the Tbilisi City Court on a new case against Saakashvili for the violent dispersal of a 2007 protest marked Saakashvili’s first public appearance since his arrest.

Speaking in court, Saakashvili said he doesn't recognize the authority of the prosecutor's office and used the hearings to denounce the Georgian authorities.

“The whole world is amazed that I am addressing you through this glass wall instead of walking freely in the country I have built,” the former president said during the court hearing.

Saakashvili is also facing charges related to the raiding of the Imedi TV company and the seizure of the property of its owner, the late businessman Badri Patarkatsishvili.