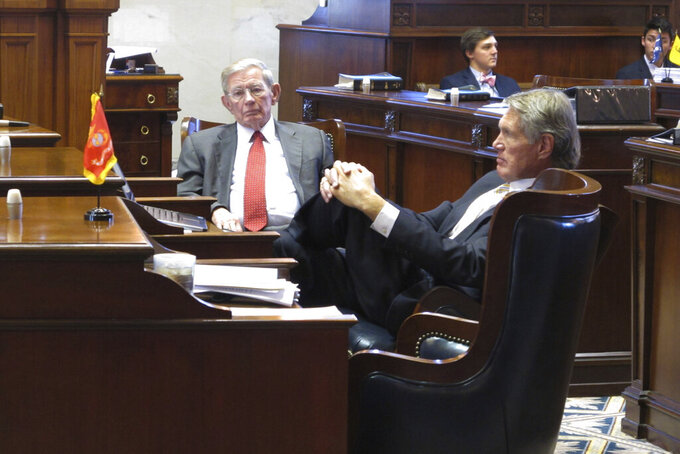 COLUMBIA, S.C. (AP) — Before the South Carolina Senate takes up redistricting Monday, the chamber's president will likely step down to take charge of its most powerful committee.

Senators expect Harvey Peeler of Gaffney, now the chamber's longest serving Republican at 41 years, to take off the purple robe signifying the person in charge of the Senate and step into the chairmanship of the Senate Finance Committee.

The third-longest serving Republican, Sen. Thomas Alexander of Walhalla, is expected to be elected unchallenged as the new president — a change in power put into motion after Senate Finance Committee Chairman Hugh Leatherman died last month.

At first glance, president of the Senate might appear to be the more attractive position. It's a role created and infused with power after a constitutional change in 2018 removed presiding over the Senate from the lieutenant governor's duties.

Peeler, 73, is giving up the ability to make some appointments, controlling debate and making decisions on whether senators are following the rules.

But the Senate Finance Committee handles all spending in the state and has been the established focus of power in the Senate, which considers tradition and seniority its key attributes.

South Carolina awards committee chairmanships to members of the majority party based on seniority and a rule put in place in 2019 to limit Leatherman's power prohibits committee chairman from also being Senate president. That means Alexander will have to give up his chairmanship of the Labor, Commerce and Industry Committee.

Leatherman and Peeler were each elected in 1980. Ties are broken by alphabetical order of last names. Leatherman ran the Finance Committee for 20 years.

Peeler has not spoken publicly to confirm his decision or give his reasoning. But several senators confirmed his plans.

Peeler's move will put Alexander in a spotlight he has rarely sought. The 65-year-old owner of an office supply company flies under the radar.

Alexander, 65, was elected to the Senate in 1994. He isn't known for fiery speeches or pointed questions, instead working to find consensus.

“Over the years, he has built relationships with all the members," said Senate Minority Leader Brad Hutto, a Democrat from Orangeburg.

After the ceremony over the change of power and laudatory speeches about Leatherman's legacy, senators will then deal with drawing maps for the Senate's 46 districts based on the 2020 U.S. Census.

The maps have caused little controversy. Senate leaders expect debate, but not a lot of substantial changes. The more disputed U.S. House maps have been delayed until January.

“Quite frankly, I think the groups most upset with the new maps feel like they have a better shot in the courts than the Legislature,” Hutto said.