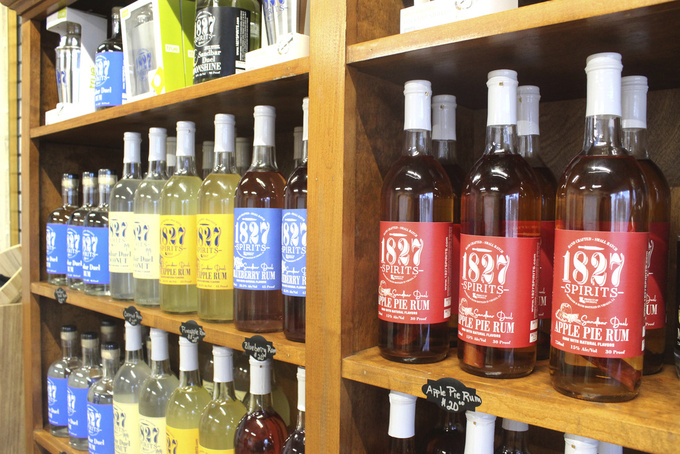 Hunter Cloud, ASSOCIATED PRESS
A selection of flavored rums made at 1827 are displayed at 1827 Spirits on Carter Street, in Vidalia, La. The business is the first legal distillery in Concordia Parish in over 100 years. (Hunter Cloud/The Natchez Democrat via AP)

VIDALIA, La. (AP) — The first legal distillery in Concordia Parish in over 100 years is open for business.

Business partners Finley Hootsell, Chuck Bearden, Kyle Greer and Wendall Gibson recently opened 1827 Spirits as a bar, taste room and distillery. They produce a selection of silver rum, spiced rum, flavored rum and moonshine on Carter Street in a space that once stored “junk,” from Hootsell’s Concordia Pawn and Gun Shop in Vidalia.

“I was ready to do something different after running a pawn shop for 30 years,” Hootsell said. “I have been interested in American history since I was a kid. My mom brought home the first foxfire books. It was written about Appalachia, and included pioneer skills in it. When I read about moonshining in the book, I was intrigued and have thought about it ever since.”

Bearden, a Natchez, Mississippi, native, has a chemical engineering background in distilling oils and oil refineries. Thirty years ago, he discovered the lure of distilled spirits.

Now, he’s brought the recipes and techniques developed over three decades to the new bar, taste room and distillery. Chemical engineering helps when producing moonshine or rum, he said.

“I have a good understanding of the reactions that occur when you are using various yeasts, filter media and distilling equipment,” Bearden said. “It helps to have a background in math and science.”

Jim Bowie’s legendary sandbar fight, which occurred near Vidalia in 1827, inspired the company’s branding. “Rum worth fighting for” is printed on t-shirts beneath a painting of Jim Bowie in the fight. Bearden and Hootsell said they love the history of the fight.

A member of the Bowie family is buried next to Bearden’s mom at the Natchez City Cemetery, he said, adding that the owners plan to display more Bowie memorabilia in the distillery room.

Producing a batch of rum takes four days from fermentation to bottle, although spiced rum is aged longer. Moonshine takes a little longer, Bearden said, adding that he is constantly looking for new flavors to develop.

“Apple pie is quite popular in flavored moonshine,” Bearden said. “To be different, we are doing an apple pie flavored rum. There is a blend of apple juice, cider, cinnamon and spice to replicate the flavor of apple pie. It is best served over ice and chilled. It could be used in other cocktails.”

Bearden uses blackstrap molasses and sugar cane from mills in New Roads to make the rum. These ferment in large plastic containers for three days. After three days, the mash has an alcohol content by volume of about five to 10 percent, he said.

Next, the mash is put in a still where he heats it to 136 degrees Fahrenheit. As the alcohol evaporates, a column captures the impurities. Then it condenses into a five-gallon carboy to repeat the cycle.

The product is distilled twice with an initial proof of 160 to 180 proof. After distillation, the alcohol passes through a charcoal filter system. Filtration removes any undesirable tastes. Most of the final product is anywhere around 30 to 90 proof, he said.

Currently, Bearden is developing a peach-flavored rum to go with the fall-flavored Apple Pie Rum.

“The leftover material is polished and has no bite,” Bearden said. “From that, you can make any kind of rum. Moonshine is made in the same process, just without any molasses.”

The distillery is open from noon to 6 p.m. Tuesday through Saturday for tastings and sales of the products.