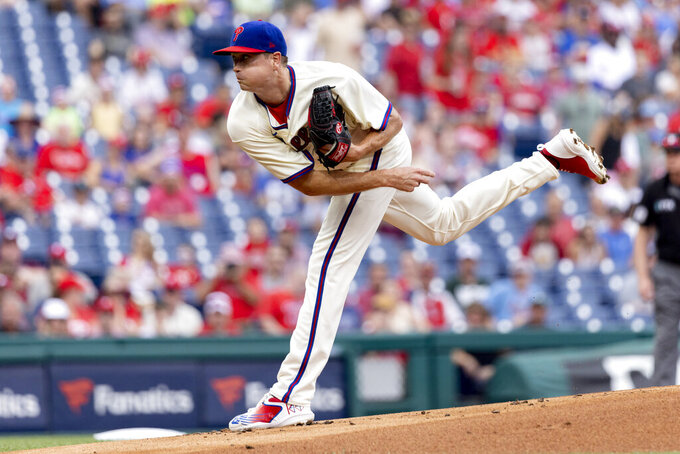 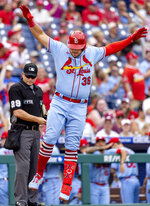 PHILADELPHIA (AP) — Nolan Arenado sparked a record barrage of four straight home runs by St. Louis in the first inning, then hit a tiebreaking drive in the ninth that sent the Cardinals over the Philadelphia Phillies 7-6 Saturday.

With two outs in the first, Arenado, Nolan Gorman, Juan Yepez and Dylan Carson homered off Kyle Gibson. It was the first time in major league history a team connected for four homers in a row in the first inning.

“It was really cool just being a part of that,” Arenado said. “It was almost surreal. You didn’t really believe it. Those moments are special. I’m very thankful for them.”

The Cardinals tied the MLB record for any inning with four in a row. It was the first time they had done it, and the 11th time overall in big league history.

“That was incredible,” Cardinals manager Oliver Marmol said. “Guys took some good swings. They were on attack.”

The home crowd at Citizens Bank Park then gasped when Lars Nootbaar followed Carlson and made solid contact on a flyball that was caught in deep left field but well shy of the warning track to end the inning.

It was 6-all when Arenado led off the ninth by clearing the wall in left field off Seranthony Domínguez (4-2) for his 17th home run. Arenando hit for the cycle on Friday night in the Cardinals’ 5-3 defeat to the Phillies.

“I just got enough of it,” Arenado said. “We’re obviously excited to win the ballgame. That’s what’s most important.”

Yairo Muñoz hit a two-run double, Matt Vierling had a pair of RBIs and Odúbel Herrera had three hits for the Phillies.

“These guys kept battling,” Phillies interim manager Rob Thomson said. “Came back to tie twice. Just couldn’t seem to get the lead, but I’m awfully proud of the way they battled.”

Cardinals closer Ryan Helsley (4-1) pitched a scoreless eighth and ninth, striking out five of the seven batters he faced.

St. Louis put on a historic power display in the first.

After Gibson got the first two outs, Paul Goldschmidt singled before Arenado’s two-run shot to left field on a slider started the long ball onslaught.

Gorman followed by driving a 2-1 cutter into the seats in right field. Yepez fouled off a 1-2 pitch before clearing the fence in left field to mark the first time since Sept. 19, 2002, that the Cardinals hit three homers in a row.

Carson finished the amazing power display by connecting on a 1-0 sinker that hit the facing of the second deck in right field.

“A lot of fun, a lot of excitement,” Carson said. “That was cool, really exciting, and something that obviously will be remembered.”

The last team to homer in four consecutive at-bats was the Chicago White Sox, who did it on Aug. 16, 2020, against the Cardinals.

The Cardinals upped the win/loss record of teams that have hit four consecutive homers in an inning to 7-4.

All five runs were charged to Cardinals starter Matthew Liberatore.

St. Louis went ahead in the fifth. After Gibson loaded the bases with no outs, Corey Knebel came on and got the first two batters out before walking Nootbaar to give the Cardinals a 6-5 lead. Philadelphia tied it in the sixth on Nick Castellanos’ RBI single.

Hicks was activated from the injured list before the game. He hadn’t pitched in the majors since May 24 before a forearm injury.

Phillies OF Kyle Schwarber was named NL Player of the Month for June after batting .272 with 12 homers and 27 RBIs in 27 games. Schwarber went 0 for 5 with four strikeouts.

Cardinals: Gorman returned to the lineup after missing the last three games. He sat the first two of those due to a bruised left hand and the final one because of Friday night’s pitching matchup.