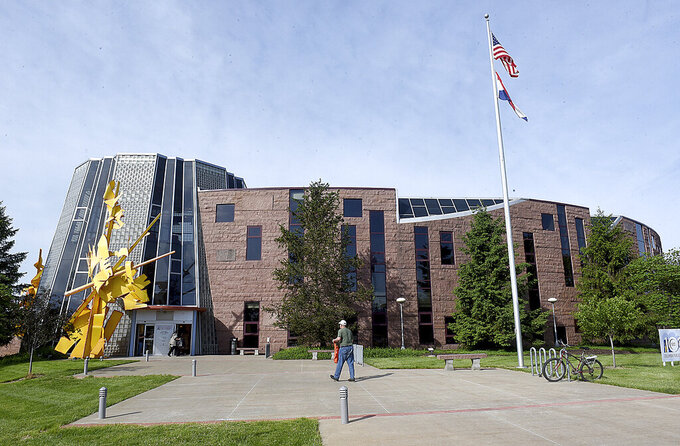 Don Shrubshell, ASSOCIATED PRESS
Visitors enter the Daniel Boone Regional Library on Tuesday May 17, 2022 in Columbia, Mo. Workers at the public library system based in Columbia are voting this week on whether to become the only active public librarians union in the state. If employees at the Daniel Boone Regional Library, which has branches in Columbia, Fulton, Ashland and Holts Summit, ratify the union, they would join a growing movement toward unionization across the country, sparked in part by the coronavirus pandemic. (Don Shrubshell/Columbia Daily Tribune via AP)

Workers at a public library system based in Columbia are voting this week on whether to become the only active public librarians union in the state.

If employees at the Daniel Boone Regional Library, which has branches in Columbia, Fulton, Ashland and Holts Summit, ratify the union, they would join a growing movement toward unionization across the country, sparked in part by the coronavirus pandemic.

The issues supporters cite are typical of most union efforts — the need for better pay and benefits, career opportunities, and safety concerns as well as a lack of communication with administrators.

Union supporters say the pandemic produced a variety of issues and underscored some that already existed: high staff turnover, differing treatment of employees, abuse of staff by patrons over masking, and a lack of clear direction for pandemic-related work.

Tori Patrick, a full-time circulation assistant at the library, said there was strong support for the union but acknowledged some employees do not think a union is necessary, particularly in the smaller branches outside Columbia.

“That was a hard connection to make. We didn’t know who worked there and how to talk to them,” Patrick said. “We have made some strong inroads but we’re still facing a difficult path to connection with some workers.”

Executive Director Margaret Conroy said the library system has competitive benefits and pay, and offered a “robust” response to safety and health issues caused by the pandemic.

She said she was unaware of communication problems because union supporters chose not to bring their concerns to administrators before organizing.

Conroy said if the union is ratified, administrators will work in good faith with employees but the library faces budget constraints private companies do not because it gets 97.6% of its revenue from property taxes.

“We are not the same as Starbucks and Amazon. We can't raise prices to increase revenue,” she said. “We have to work within the budget taxpayers provide.”

Employees, who are voting Wednesday through Saturday, would be represented by the American Federation of State, County and Municipal Employees.

If the union is formed, the Missouri workers would join more than 2,000 cultural workers who have joined AFSCME since 2019, including employees of museums, zoos and science centers along with library workers from Ohio, Illinois, Oregon, Massachusetts, Washington and Maryland.

The library workers' issues are the same as those driving an increase in efforts to unionize nationwide, including at Amazon and Starbucks, said professor John Logan, director of Labor and Employment Studies at San Francisco State University.

A Gallup Poll showed about 68% of Americans approved of labor unions in September of 2021 — the highest approval rating since 71% in 1965.

Despite those numbers, it remains unclear if the current surge in union popularity will be sustained, Logan said.

“No one is saying because of this we will see millions of new union members,” Logan said. “There have been times in the past where there was union momentum and it all went up in smoke. But this is a little different, there is a sense that the pandemic has fundamentally altered something in the labor landscape."