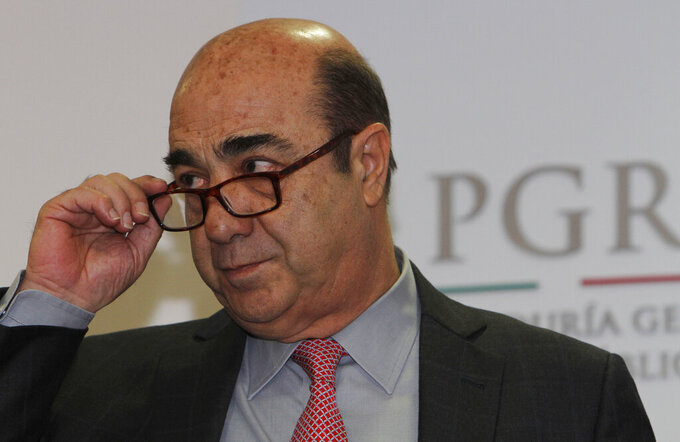 MEXICO CITY (AP) — Mexico’s anti-money-laundering agency said Tuesday it has found evidence of corruption on the part of the country’s former attorney general.

Former Attorney General Jesus Murillo Karam has been jailed since August on charges he committed abuses during the investigation into the disappearance of 43 students in 2014.

Now Mexico’s Financial Intelligence Unit says Murillo Karam didn’t declare about $1.36 million in income. The unit also said his relatives had an interest in a company that may have benefited from government contracts during his term in office from 2012 to 2015.

Murillo Karam has denied allegations he created a false version of the students’ disappearance to cover up for others who were involved in it. He was not immediately available to respond to the new accusations.

The unit said it had sent the evidence to prosecutors for possible charges of influence trafficking and tax evasion.

It said an investigation showed that Murillo Karam's children, nephew and son-in-law were involved in a private company that got contracts from the government's Communications and Transport Department.

The unit said the son of the head of that department served as Murillo Karam's secretary when he held the post of attorney general, raising the possibility of an exchange of favors.

Murillo Karam, 74, oversaw Mexico’s original investigation into the disappearances of 43 students from a radical teachers college and now faces trial on charges of forced disappearance, not reporting torture and official misconduct in that case.

Murillo Karam has conceded there may have been “errors” in the investigation, but said that in the eight years since, no one has been able to prove another version of what happened to the students in the Guerrero state city of Iguala.

He announced in 2014 that the students had been abducted by local police, turned over to a drug gang and killed, their bodies burned at a garbage dump and the remains dumped in a river. He called it the “historic truth.”

But independent investigations and the current Attorney General’s Office have discounted that version. They assert that various levels of authorities were involved, including security forces, and that evidence and crime scenes were altered.

There were also instances of torture, improper arrest and mishandling of evidence that has since allowed most of the directly implicated gang members to walk free.