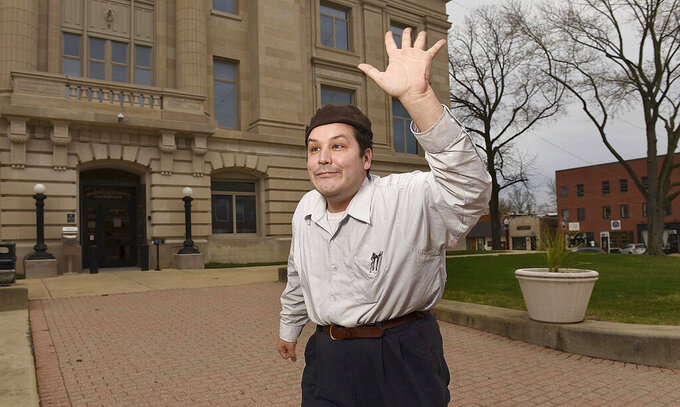 A fan of the 1960s TV classic series drove it to the annual Mayberry Days festival last month in Mount Airy, North Carolina, hometown of the show’s late star, Andy Griffith. When the fan asked Joel Alvarado to autograph the car’s dashboard, Alvarado felt like he would be vandalizing the shiny vehicle.

“It felt so weird, but he was like, ‘I wouldn’t have it any other way,’” Alvarado recalled, with a laugh. “That tells me I am doing something that’s crazy.”

Indeed, fondness for Mayberry continues more than a half-century since the series ended its run from 1960 to ’68.

That’s why the fan wanted Alvarado’s signature on his car.

Alvarado plays a Goober Pyle impersonator in the newly released independent movie “Mayberry Man.” The film premiered in Mount Airy during Mayberry Days, and members of the movie cast mingled in town along with festival regulars and fans, many dressed as Sheriff Taylor or Barney Fife, Floyd the barber, Aunt Bea, Gomer and Goober Pyle, and others. Most of the actors who originally portrayed such characters on the “Andy Griffith Show” have died.

The nostalgia surrounding the show is alive and well, though.

“These are not casual fans,” Alvarado said of those attending the Mayberry Days festival last month in North Carolina. “It was almost like Comic-Con of the Mayberry world.”

“Mayberry Man” also premiered last month in Danville, Indiana — home of the Mayberry Cafe and the Mayberry in the Midwest Festival — as well as Los Angeles. Alvarado attended all three. The movie also was filmed in Mount Airy, Danville and Los Angeles.

Alvarado passed up a chance to view the film early, through a “secret link” for cast and crew. He wanted to see it, for the first time, inside a theater at the premiere. It’s the 35-year-old’s first role in a feature film. “Mayberry Man” and the crowd’s reaction impressed him.

“I actually was surprised, because it turned out so well,” Alvarado said Monday by phone from Indianapolis, where he lives. “I couldn’t remember a time when people were so immersed in a movie. There was nonstop laughter. So, it was kind of refreshing.”

He senses that audiences long for the simplicity of Mayberry, a small town that only existed on TV screens. It aired during the turbulent ’60s, providing an escape from the turmoil of the real world.

Likewise, the new “Mayberry Man” movie builds on that homespun foundation. Its plot features Chris Stone, a cold, snooty Hollywood actor who gets busted for speeding and then sentenced to spend one week at a present-day Mayberry festival, full of neighborly people celebrating the virtues of Andy, Barney, Opie and Aunt Bea.

Several impersonators of “Andy Griffith Show” characters attended, as well as a few surviving former cast members like Clint Howard (a veteran actor and real-life brother of Opie actor Ron Howard) and children of the original actors, including Dixie Griffith and Karen Knotts. Howard, Griffith and Knotts appear in the film, too.

The Hollywood star sees Mayberry festivalgoers as bumpkins. That’s why the judge handed Stone (played by Ball State grad Brett Varvel) that sentence, hoping the atmosphere changes the hard-edged actor and gives him “a chance to discover the true meaning of friendship and family,” as the movie’s promo reads. Stone discovers a personal connection to Mayberry in the process.

“It has a Hallmark-style feel,” Alvarado said, “and you don’t have to be an ‘Andy Griffith Show’ trivia star to follow it. If anyone’s looking for a family, wholesome-feel (movie) they can bring everyone to, it fits the bill.”

Of course, not all of America could visualize themselves in the TV show. Minorities rarely appeared, except as extras. Alvarado’s role as a Goober impersonator in “Mayberry Man” breaks that ceiling. He’s the son of a Hispanic father and white mother. “So, I was happy to have been able to contribute as a minority,” Alvarado said.

Alvarado doesn’t see a barrier to the Mayberry story. “There’s actually not one,” he said. “Mayberry is anywhere. And it’s all of us. It’s more of a feeling. It’s something that anyone can be a part of.”

The same openness pervaded in the casting, Alvarado said. Instead of type-casting the characters, “it was like, ‘Showcase yourself, whoever you are, and see how this works,’” he said. “And that was pretty cool.”

“Mayberry Man” is the brainchild of brothers Stark and Cort Howell. Stark produced it, while Cort wrote and directed. Their late father, Hoke Howell, appeared in two “Andy Griffith” episodes. The Howells originally gave Alvarado a role as a fan at the festival. When the initial choice for the Goober role dropped out because of health problems, they asked Alvarado to audition. He “knocked it out of the park,” Cort Howell said, and put his own twist on the carefree, oddball ace mechanic.

The movie isn’t a re-creation of “The Andy Griffith Show,” Cort Howell emphasized in an email interview Monday. Its modern-day setting with fans and impersonators at a Mayberry fest lets the actors spice up their characterizations. Some were actors pretending to be impersonators. Others were longtime Mayberry character impersonators cast especially for the film.

“Joel Alvarado isn’t a Goober impersonator,” Cort Howell explained. “It was his own interpretation of Goober that landed him the role. His version of Goober is hilarious and stands on its own.”

Alvarado is anxious to see what’s next for him. He studied broadcast journalism at ISU in 2005 and 2006, then left Indiana for California to work in the reality television industry. Years later, after moving back to the Hoosier state, Alvarado landed the “Mayberry Man” role. Soon, he was donning size 48 work pants (belted high above his waist), a filling station shirt and Goober’s trademark whoopee hat in a movie that earned a spot in this month’s Heartland Film Festival in Indianapolis. Alvarado’s heard talk of a sequel. He’d also like to pursue other acting roles, work on documentaries or appear on reality shows like “Worst Cooks in America.”

“I think that would be funny — a Goober in the kitchen,” he said.

Landing a credit in a film connected to Mayberry could open such doors.

“If the (movie) was called ‘Pizza Martians of the Planet Nebula’ and I played Farquart, their alien leader, I wouldn’t be in the same situation,” Alvarado quipped.

HOW TO SEE `MAYBERRY MAN'":

The new movie “Mayberry Man” can be streamed through Amazon Prime, and DVDs can be ordered at mayberrymanmovie.com. Showings of the movie are scheduled for 2 p.m. Oct. 17 at the Historic Artcraft Theatre in Franklin; and Oct. 21-28 at Yes Cinema in Columbus.