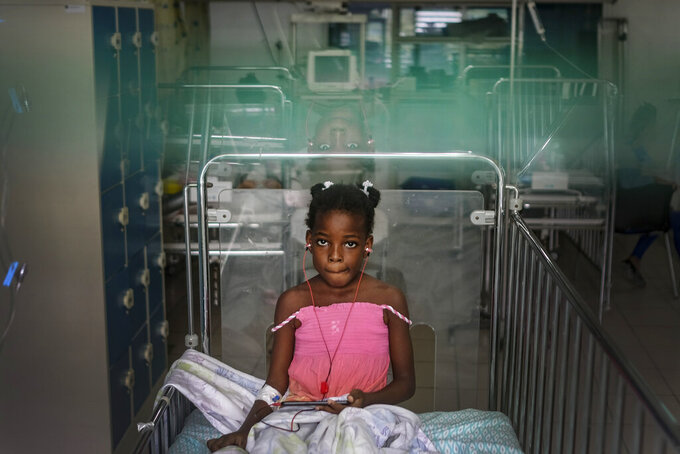 Matias Delacroix, ASSOCIATED PRESS
A girl rests on a bed as she listens to music at the Saint Damien Pediatric Hospital of Port-au-Prince, Haiti, Sunday, Oct. 24, 2021. Haiti's capital has been brought to the brink of exhaustion by fuel shortages and the capital's main pediatrics hospital says it has only three days of fuel left to run ventilators and medical equipment. (AP Photo/Matias Delacroix)

PORT-AU-PRINCE, Haiti (AP) — Haiti’s capital has been brought to the brink of exhaustion by fuel shortages, after staggering along despite an earthquake, the assassination of the president, gang violence and mass kidnappings.

More than two weeks of fuel deliveries interrupted by gang blockades and abductions of fuel truck drivers have driven residents of Port-au-Prince to a desperate search for gasoline and diesel. The fuels are widely used to run generators needed to compensate for the country’s unreliable electrical system.

The city's main fuel terminals are located in or near gang-dominated neighborhoods like Martissant, La Saline and Cite Soliel, and some gangs have reportedly been demanding extortion payments to allow fuel trucks through.

The gangs have become a powerful force in Haiti. One of the gangs recently kidnapped 17 members of a U.S.-based missionary group and reportedly demanded a ransom of $1 million each for their release, warning that the hostages will be killed if their demands aren’t met. There is no word yet on their fate.

The gangs have also kidnapped hundreds of Haitians, and the government appears unable, or unwilling, to take them on.

Protests broke out Saturday in the Delmas neighborhood, where gas stations have run out of fuel. Police arrived and dispersed the crowds with warning shots of what appeared to be live rounds.

Officials at the Saint Damien hospital, the capital’s foremost pediatrics center, said it had only three days of fuel left to run generators that power ventilators and medical equipment. The hospital can run partly on solar power, but that doesn't provide enough electricity for all its needs.

“I am very worried,” Gay said. “The situation is very critical.”

“The oxygen is running on electricity. If we don't have electricity to run the oxygen and the (medical) apparatus, we will need to close” to new patients, he said.

Gay estimates the approximately 1,500 gallons of fuel left in the hospital's reserve tanks would last only for about three more days.

The hospital normally gets deliveries of about 3,000 gallons of fuel twice a month.

“We contacted the company, and they said they cannot deliver, they cannot come across town because of the danger to the drivers,” Gay said.

The United Nations Children's Fund warned Sunday that “hundreds of women and children who seek emergency care in health facilities are at risk of dying if solutions are not found to the fuel shortage prevailing in Haiti for weeks due to insecurity.”

It said several hospitals across the country have sent pleas for help directly to UNICEF and its partners.

“With the insecurity prevailing in Port-au-Prince, the lives of many child-bearing women and newborn babies are in danger because hospitals that should give them life-saving care cannot operate normally due lack of fuel. They risk dying if health services cannot give them adequate care,” said Raoul de Torcy, UNICEF Deputy Representative.

UNICEF said it had secured a contract with a local provider to supply hospitals in and around Port-au-Prince with 10,000 gallons of fuel. “But due to insecurity, the provider eventually declared he could transport fuel neither in the Haitian capital, nor in other provinces ... because many truck drivers no longer accept to ply the roads crossing gang-controlled areas for fear of being kidnapped and their truck hijacked.”

Meanwhile, capital residents were on a desperate chase to get fuel. Many gas stations remain closed for days at a time, and the lack of fuel is so dire that the CEO of Digicel Haiti announced last week that 150 of its 1,500 branches countrywide were out of diesel.

On Thursday, hundreds of demonstrators blocked roads and burned tires in Port-au-Prince to protest the severe fuel shortage and a spike in insecurity.

Alexandre Simon, an English and French teacher, said he and others were protesting because of the dire conditions facing Haitians.