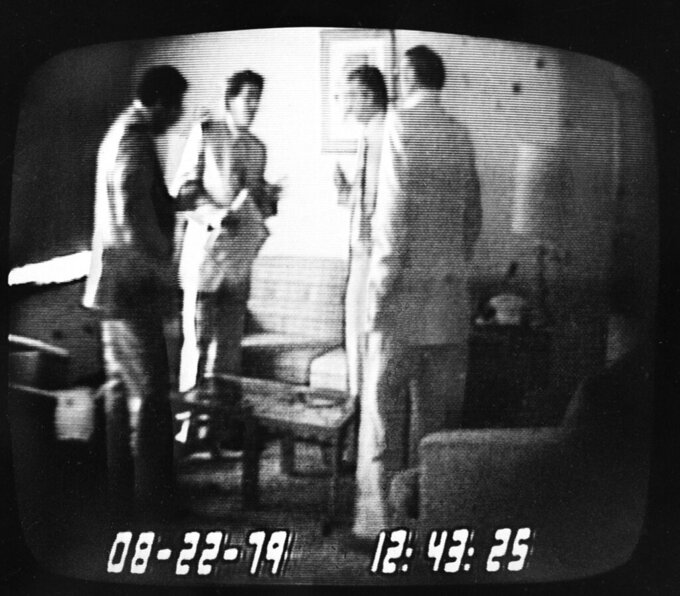 Uncredited, ASSOCIATED PRESS
FILE - Rep. Michael Myers, second from left, holds an envelope containing $50,000 he just received from undercover FBI Agent Anthony Amoroso, left, in this videotape played at the first Abscam trial, Oct. 14, 1980. Myers, the former congressman from Philadelphia who went to prison in the Abscam scandal in the 1970s, was sent back to prison Tuesday, Sept. 27, 2022, at age 79, in a ballot stuffing case. (AP Photo/File)

PHILADELPHIA (AP) — A former congressman from Philadelphia who went to prison over the 1970s-era Abscam scandal was sent back to prison Tuesday at age 79 in a ballot stuffing case.

Former Democratic U.S. Rep. Michael J. “Ozzie” Myers was sentenced to 2 1/2 years in prison by a judge who questioned whether he had learned any lessons over the years. Myers admitted he had worked with election officials to pad the vote tallies of his political consulting clients. Some were running for city judgeships.

“Myers would solicit payments from his clients in the form of cash or checks as ‘consulting fees,’ and then use portions of these funds to pay election officials to tamper with election results,” U.S. Attorney Jacqueline Romero said in a statement after the hearing.

“Voting is the cornerstone of our democracy. If even one vote has been illegally cast or if the integrity of just one election official is compromised, it diminishes faith in process,” she said.

Myers pleaded guilty in June to violations of election law, conspiracy, bribery and obstruction for his work on behalf of Democratic candidates from 2014 and 2018. There was no evidence the crimes changed the outcome of any election, his lawyer said.

“The people of Philadelphia should feel secure that the elections are run fair and free, and when it is that these occurrences happen ... they are found out,” said defense lawyer Noah Gorson, who called the instances of election fraud in the city rare.

“They were unprepared for that, because the government had agreed that they had no objection to his self-surrendering, and he is an elderly man,” Gorson said. “That wasn’t needed.”

In the Abscam sting, Myers was convicted of bribery and conspiracy for taking money from FBI agents who posed as Arab sheiks. He served more than a year in prison and was expelled from Congress in 1980.

Myers also served six years in the Pennsylvania House before his 1976 election to Congress.