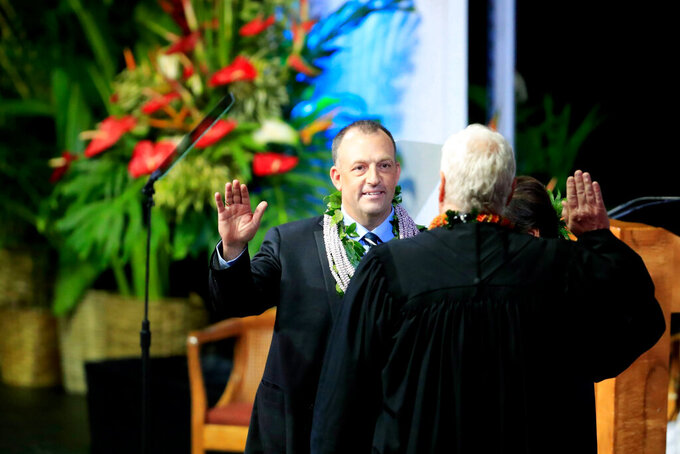 Jamm Aquino, ASSOCIATED PRESS
Josh Green takes the oath of office to become Hawaii's new governor on Monday, Dec. 5, 2022, in Honolulu. Green has spent the past four years as lieutenant governor under fellow Democrat David Ige, who served two terms and was not eligible to run again. (Jamm Aquino/Honolulu Star-Advertiser via AP)

HONOLULU (AP) — Hawaii Gov. Josh Green took the oath of office on Monday and immediately vowed to address homelessness and housing, and ask the Legislature to help eliminate the state's tax on food and medication.

Green said in his inaugural address that he wanted to get rid of regressive taxes. Hawaii's general excise tax covers the sale of food and medication in addition to other goods.

“The poorest families are hit the worst, and those who are struggling to survive from paycheck to paycheck really can’t afford that tax,” Green, a Democrat, said to loud applause.

Green also vowed to encourage the construction of more housing for residents. He said he has “humbly suggested” to the mayors of each county that they all build “Kauhale Homes,” or small houses, for homeless individuals like those Green helped build on Oahu when he was lieutenant governor.

He said the state would meet aggressive renewable energy goals, set by past governors, by approving a range of new projects.

The world will look at how Hawaii is taking action on housing, homelessness, poverty and climate change, he said.

“But it will only happen, only happen if we truly come together and commit ourselves to putting our values of ohana and aloha into practice and making them a reality for everyone in the state of Hawaii,” Green said, using the Hawaiian word for family.

“We all know that the challenges that lie ahead of us are very complex. But it makes a big difference when you have an administration that wants to take on these problems,” he said after the swearing in.

On Green’s proposal to eliminate the tax on food and medication, Saiki said the House agrees that the state should minimize the tax burden on Hawaii residents, especially those with less resources.

“We are committed to finding the most effective way to accomplish this,” Saiki said.

Luke, who was sworn in at the same ceremony, served as House Finance Committee chairperson for many years.

Green took over from fellow Democratic Gov. David Ige, who served two terms marked by a series of emergencies and crises ranging from volcanic eruptions to the COVID-19 pandemic and a false missile alert.

Green spent the past four years as lieutenant governor under Ige. Before that he was a state senator and representative.

Green, who hails from Pittsburgh, worked as a doctor in rural Kau on the the Big Island before he was elected to the Legislature. He moved to Hawaii with the National Health Service Corps in 2000.

He continued working part time as a physician while in the Legislature and as lieutenant governor.